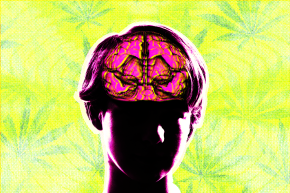 Kids Could Take A Weed-Based Drug To Prevent Seizures

Pot may succeed where other drugs have failed

By any measure, marijuana has steadily become more socially kosher, according to both opinion polls and state and local policies. And even as U.S. Attorney General Jeff Sessions has voiced his intention to once again harshly punish pot users, other Trump appointees have pushed back against the increasingly unpopular idea.

A new study of young epileptic sufferers released this month, though, reminds us that it won’t be weekend smokers looking to wind down who stand to gain the most from marijuana’s growing acceptance.

As part of a double-blind clinical trial, scientists followed 225 children and adults dealing with a severe, often untreatable form of epilepsy called Lennox-Gastaut syndrome. The volunteers, on average 16-years-old, were either given a placebo or varying doses of cannabidiol, one of the two major components of marijuana. Those who took cannabidiol (in liquid drops), regardless of the dose, were significantly more likely to report fewer seizures than the placebo group over the course of 14 weeks. They were also more likely to say they felt better.

“Our study found that cannabidiol shows great promise in that it may reduce seizures that are otherwise difficult to control,” said lead author Dr. Anup Patel of Ohio State University in a statement. “This is important because this kind of epilepsy is incredibly difficult to treat.”

People with Lennox-Gastaut syndrome, which usually starts in childhood, are particularly unlucky even among epilepsy sufferers. They regularly experience different types of seizures on a daily basis, often also have learning impairments, and most drugs do little to help. In the current study, volunteers had an average of 85 so-called “drop” seizures per month, which causes a momentary loss of muscle tone, leading to falls and other injuries. They were taking three anti-seizure drugs on average and had previously failed to respond to at least six medications.

Medical marijuana has often been painted as an easy way to get high, and THC in pill form has already been approved to help people on chemotherapy avoid nausea, vomiting and weight loss. But in reality, it’s not THC, responsible for the psychoactive “high” we get from pot, that advocates are most excited about using to treat sick people, but cannabidiol.

Research and many anecdotal stories has consistently indicated, but not necessarily proven, that cannabidiol could help reduce seizures. That gap in evidence inspired the researchers to perform sturdier studies on the connection. Last year, many of the same team members published results from a cannabidiol trial of patients with either Lennox-Gastaut syndrome or another form of epilepsy, Dravet syndrome, finding similar improvements.

Unlike the earlier study, though, mostly designed to test if taking cannabidiol was safe, the researchers this time included a placebo group and didn’t tell patients which one they belonged to beforehand. That means these encouraging results are more likely to be genuine than mere chance or wishful thinking.

Patients did experience some side-effects, mainly a loss of appetite and sleepiness, but none were particularly severe. Around 40 percent of cannabidiol takers cut their average number of seizures by half or more, compared to 15 percent who reported the same in the placebo group.

Armed with these results, the researchers plan to seek approval from the Food and Drug Administration to license cannabidiol as a new drug to treat Lennox-Gastaut syndrome sometime this year.

The trial’s findings, which have yet to be published in a peer reviewed journal, will be presented next week at the American Academy of Neurology’s 69th Annual Meeting in Boston.