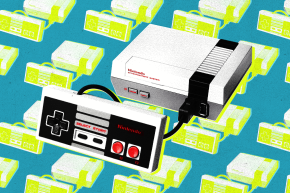 You Can Shell Out For Nintendo’s NES Classic Edition

Nintendo’s NES Classic Edition has been discontinued for the foreseeable future, and it’s most likely you weren’t one of the lucky few who bought a unit. However, there’s still hope you can get your hands on one, if you’re willing to pay up to five times the original price.

The NES Classic Edition is a miniaturized version of original gaming console with 30 pre-installed classic games, such as Super Mario Bros., Donkey Kong, Pac-Man, Mega Man and The Legend of Zelda.

Nintendo announced last week that it’s shipping its last systems of the NES Classic Edition this month, and naturally, the prices of units being resold on eBay and Amazon have inflated. People online are reselling the plug-and-play console for anywhere between $200 to $500. When the NES Classic Edition launched last November, it only cost $60 (depending on the store).

@NintendoAmerica: this is what you allowed to happen with your fouled-up rollout. Now discontinue and the crooks win. #nesclassic pic.twitter.com/nTWWgvNyfx

Upon first being released, the NES Classic Edition quickly sold out and Nintendo added extra shipments when it realized the console was in high demand. However, those sold out almost immediately as well.

“We understand that it has been difficult for many consumers to find a system, and for that we apologize,” A Nintendo representative told IGN. “NES Classic Edition wasn’t intended to be an ongoing, long-term product.”

Nintendo has globally announced that it’s discontinuing the NES, but in Japan it gave gamers new hope that production might be resumed in the future, according to Express. “This product has ended production for now,” Nintendo Japan’s statement read. “When production is being resumed, we will tell you on our website.”

It might not be the same for production in the U.S., but if it is, it’s still unclear when they’ll be sold again — if ever. In the meantime, people have been lamenting the discontinuation of the system online. Other are using it as an excuse to build their own.

Nintendo: "People love the NES classic, it's selling better than anything in 10 years.

Yknow what we should do? Stop selling it. Genius!"

Dear @NintendoAmerica, I would gladly write you a check for $100 if you could send me an NES Classic. #nes #classic #nesclassic #bringitback

gotta make my own NES Classic. I aint built a compter in so long