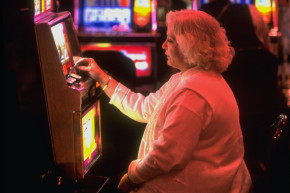 From loans to lottery tickets, a study suggests that people risk more to keep up with the mega-rich

The problem with income inequality isn’t just that it keeps most people in poverty while a tiny few become astronomically wealthy. A new study suggests people’s awareness of income inequality pushes them to take financial risks — such as gambling or taking out risky loans — more often in a likely unsuccessful effort to catch up to the mega-rich.

Income inequality has exploded over the past 30 years, as has media attention around it. Writing in the Proceedings of the National Academy of Science, psychologists from the University of North Carolina at Chapel Hill and the University of Kentucky point out the richest one percent worldwide control almost as much wealth as everyone else on the planet. In the U.S., the top 0.1 percent are about as wealthy as the bottom 90 percent.

Given those economic realities, the researchers wanted to understand how people’s knowledge of income inequality shaped their thinking. They designed an experiment where participants could gamble to win at most $5. Participants chose between different bets, some offering high risk and high reward and others the opposite. The trick is that they were also told ahead of time the average winnings for previous participants.

But this is clearly just some low-stakes laboratory experiment — does that actually say anything about the real world? The final part of the study looked at aggregated Google search histories in different states. People living in states with higher income inequality were more likely to search for risky financial topics like the lottery, payday loans, and deals offering no required downpayment. This was true even when adjusting for different average incomes, so this isn’t just a function of there being more poor people in states with greater income inequality.

The study results suggest income inequality creates additional repercussions that affect our economic behavior. When there’s no obvious way to climb the economic ladder, it’s not surprising that people take bigger risks  — and, in the process, make it far likelier they will end up losing everything.