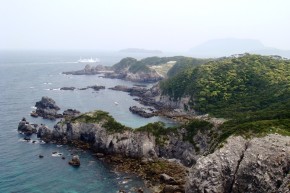 Climate change will radically alter the environment over the next century, and perhaps nowhere will be hit harder than the world’s oceans. About a third of all humanity’s carbon emissions go straight into the oceans, making the water more acidic and less hospitable to fish, coral reefs, and other organisms. It’s not a great outlook for the future of marine life, but for one island off Japan’s southeastern coast, the future is now.

Located about 100 miles from Tokyo, the island of Shikine is home to an underwater volcano that releases an unusually large amount of carbon dioxide gas into some of the surrounding waters. These areas serve as a preview for what the oceans could look like in 2100, assuming humans don’t take serious steps to curb our carbon emissions. The French research team Tara Expeditions have sailed their schooner to the island to compare these high-carbon waters with the other, more typical parts of the island’s surrounding marine environment.

“It’s like a natural laboratory,” biologist Sylvain Agostini of Japan’s University of Tsukuba said in a video explaining Tara’s research. “Unlike in conventional laboratory and aquarium studies, we’re not limited to one species and a few individuals. At this site we can study the effect of ocean acidification on the entire ecosystem, the fish, algae, corals, and how they interact with each other. This environment corresponds to what we will have in the future.”

It’s particularly important for researchers to see what, if anything, can be done to save the world’s coral reefs in the face of global warming and ocean acidification. Reefs are home to about a quarter of all marine life despite only taking up less than a thousandth of the ocean surface. Coral has already been hit hard by climate change, with Australia’s Great Barrier Reef making international headlines in the past year after much of a 500-mile section died as a result of warming ocean temperatures.

Close study of the waters around Shikine could give scientists key clues to protect coral reefs before the entire ocean becomes one big, carbon-filled environment. Though anyone hoping Shikine would reveal how life can find ways to thrive when given time to adapt to acidic water may want to temper those expectations, as ecologist Maggy Nugues reported after diving to the waters near the volcano: “Very, very few corals and only a few fish,” she said. “No diversity. No life.”