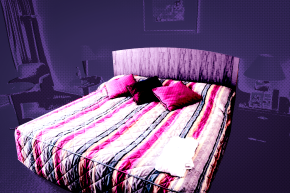 “The performer had not worked on an adult set during the window of transmission, and had not participated in any fluid exchange shoots since their last negative test,” according to a statement on the Free Speech Coalition (FSC) website. In other words, it appears unlikely that this was an on-set transmission or that other performers were put at risk. As the Adult Performer Advocacy Committee said in a statement, “Based on the current genealogy, there is low-risk to the performer pool.”

FSC says it is calling for the hold “out of an abundance of precaution.” Such shutdowns are standard protocol for the industry, which does not mandate the use of condoms but instead relies on a twice-a-month testing regimen for sexually transmitted infections. FSC’s Performer Availability Scheduling Service (PASS) maintains a database of test results, which is consulted by directors and gives the all-clear for performers to shoot. There hasn’t been an on-set transmission of HIV on PASS-regulated shoots in over a decade, according to FSC.

Nonetheless, there has been an intense push by the AIDS Healthcare Foundation in recent years to mandate the use of condoms in the adult industry. Just last year, California’s Proposition 60, which would have required condoms on adult shoots filmed in the state, failed to pass. Earlier that year, California’s Division of Occupational Safety and Health attempted to mandate condoms — as well as safety goggles and dental dams, according to opponents — but that also failed.