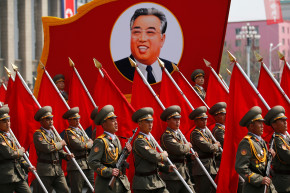 The event, celebrating founder Kim Il Sung's 105th birthday, was a show of force amid heightened tensions with Washington

Soldiers march by a portrait of Kim Il Sung during a military parade in Pyongyang. — REUTERS
By Ethan Harfenist
Apr 15, 2017 at 12:20 PM ET

North Korea showed off its military might during a parade in Pyongyang on Saturday, in celebration of its founder’s birthday. But while the isolated country’s newest weapons rolled through the streets of the capital during the event, North Korea did not carry out a nuclear test or ballistic missile launch to commemorate Kim Il Sung.

Leader King Jong Un has used April 15 as a way to fuel patriotism and bolster his own popularity. Thousands of soldiers paraded through Kim Il Sung Square, followed by several tanks. According to Agence France-Presse, the country then presented a total of 56 missiles, representing 10 different varieties.

“The signal that they’re trying to send is that they’re moving ahead with solid-fuel missiles,” Melissa Hanham, an expert at the James Martin Center for Nonproliferation Studies in California, told the Washington Post.

It was also a bold display for enemies such as the United States. The event was held after North Korea’s latest missile test prompted the U.S. to send an aircraft carrier to the region. President Donald Trump has issued repeated warnings about North Korea’s nuclear ambitions, tweeting that the country is “looking for trouble” on Tuesday.

But, according to AFP, Choe Ryong-Hae, an aide of Kim Jong Un’s, said that North Korea could “beat down enemies with the power of nuclear justice,” adding that the North was “prepared to respond to an all-out war with an all-out war.”