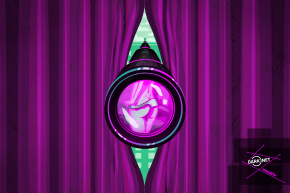 “Roger” is a security guard. He’s vague on the exact details, but his jobs afford him access to several rooftops in the downtown area of an unnamed city. One of these roofs has a view of a high-rise hotel across the street. The building’s windows are so high up that guests tend to feel safe leaving the curtains open. So, Roger climbs out onto a ledge on the roof, trains his handheld high-zoom camera on the uncovered windows, and hits record.

Then, if he happens to catch an unsuspecting woman, especially a naked one, he posts the video on the internet.

Roger has posted such videos more than two dozen times in a thread on the message board The Voyeur Forum. In one clip, there’s the rushing sound of big city traffic as the camera shakily zooms in on a large window illuminated against the dark of night. A sheer curtain is pulled, but inside a woman is still visible wearing a thick white bathrobe. Her shirtless male companion tosses back the covers and gets into bed. Then she shrugs the robe off to the floor and her naked body is visible for a brief moment before the clip ends.

He’s captured naked women in their hotel rooms talking on the phone, drying off after a shower, and lathering themselves with lotion. (Vocativ has reported his posts to the FBI.) The responses he gets from other forum members are jaw-on-the-floor enthusiastic. One guy writes, “i think you’re a voyeur god!!” Says another, “wowowowowo, so awesome so lucky.” Many simply beg for more — as one commenter writes, “more more more more.”

This is just one of more than 14,000 threads on the website, which bears a header of a cartoon man peeping in a window with both his tongue and his dick hanging out. It hosts clips like Roger’s and all manner of other videos alleged to be taken without the subject’s permission. Some posters share videos of sex — with an unsuspecting wife, girlfriend, ex, or one-night stand — purportedly filmed with a hidden camera. Others post what they claim are secretly captured images of women in changing rooms, bathrooms, or even peeing in the woods. It’s a thriving community of voyeurs who share their “catches,” as some call them, swap technical tips, and enthusiastically egg each other on.

For example, in March, a sex tape began circulating of actress Mischa Barton — she says her ex used a hidden camera to film her without permission. Sportscaster Erin Andrews was secretly filmed in her hotel room and, though the man behind the video served time behind bars, the video is still widely available online. It’s easy to find local news stories of people, mostly men, hiding cameras in toilets, locker rooms, tanning beds, and shoes. There are also the perennial cases of “upskirting” and “downblousing.”

The message boards also serve to help keep voyeurism better hidden, as commenters frequently swap tips. In a post on The Voyeur Forum, one man writes, “My local Target store has a single changing room that men and women share. It also has about an 18″ gap at the bottom of the door (no gaps at the bottom of the walls though),” he said. “The Rue21 by me has about a 12″ gap below the door and walls that go to the floor. But the ladies shopping there are pretty hot.” A thread on Amateur Voyeur Forum explores good places to capture women peeing in public. They also share more technical information, like how a camera disguised as a keychain can be used to snoop under dressing room doors, or how miniature cameras can be hidden in shampoo bottles.

“Now that surreptitious photography and video recording is cheap, easy, and often impossible to detect … anyone can engage in intimate surveillance, and anyone can be a victim of it,” said Franks. She points out that there’s an “entire industry devoted to making it easier to take photos and videos secretly,” including everything from pen cameras to iPhone apps for stealthy photo-taking.

And, beyond just helping each other to perfect their voyeurism skills, message board regulars encourage each other to keep going. In a thread on The Voyeur Forum from the alleged dressing room peeper, commenters are generous with their virtual backslaps and fist-pumping. “Fantastic work! Stay safe and stay generous!” enthuses one commenter. They caution each other to stay safe and not get caught, but, of course, to always continue. Prolific posters are told that they’re legendary and, indeed, their videos can be found across the web, including on tube sites, with their message board handles attached.

Eventually, Roger decided to back away from his message board fame. “On a sadder note, I think this will be my last video upload in this thread. I’m retiring from peeping and might move on to up skirts or something else,” he wrote one day. Fellow commenters asked him why — was he caught, was everything OK? — and mourned his departure. “I’m still going to do it, i’m just not going to post anymore videos of it,” he explained. “The problem is my morality is getting in the way. I started feeling bad about spreading these around the net and in turn it lost all of it’s fun for me.”

But, just over a year later, Roger was back in the same thread with another video — and then another, and another.