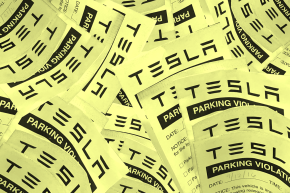 Elon Musk has taken on many projects lately: building electric autonomous cars, designing a snake-like charging station, planning missions to space and digging up room for the first hyper loop in the U.S. However, there’s one more project he needs to attend to immediately: the parking lot at the Tesla factory.

The parking situation at the Tesla offices in Fremont, Calif. is apparently a nightmare, according to a recent story from the Wall Street Journal. And to prove it, the Instagram account @teslaparkinglot, had been documenting the best — or the worst — of employees parking skills and obstacles to get to work. However, after receiving some media attention last week, the Instagram account was taken down over the weekend for unknown reasons. On Monday, Vocativ was unable to contact the Gmail address associated with the Instagram account — it had been inactivated as well.

The person behind the Instagram account, who asked to remain anonymous when they talked to Vocativ on Friday prior to removing the account, said they started the account about a year ago after joking around with some colleagues about starting a parking lot blog.

“I initially held off because I was concerned I could get fired if I started an account like this,” @teslaparkinglot, who has been at the company for four years, told Vocativ. “I mainly thought that my peers and fellow frustrated Tesla employees would find it amusing, but it has spread beyond that.”

The account had more than 11,000 followers and posted 134 photos of outrageous parking situations. The Instagram account even had an email account setup for submissions, so anyone who sees something ridiculous can take a snapshot and be featured in the page.

Some employees suspect that people have started to park in crazy ways just so they could be featured, but the person running the account assured Vocativ that the parking situation is really just that bad.

There are currently 6,000 employees working at Tesla, but apparently there are only 4,500 parking spots available. Therefore, when employees see any available space, they make it a parking spot.

“I’ve seen people crawl out of their trunks after pulling into very tight parking spaces. I do find it concerning that people disregard the red zones and park in front of fire hydrants or in handicap zones,” @teslaparkinglot said.  “Many people are not willing to go to the overflow lot and take the shuttle; they’ll double park, park on a curb, block another car in.”

Although the parking problem doesn’t have an easy solution, @teslaparkinglot, along with other employees, believes management could put a bit more time, money and effort into fixing the solution and caring about employee satisfaction and safety.

“The way that Tesla runs — long hours, crazy high numbers and production expectations — if they can figure out how to do all of that, and if Elon has been able to achieve all of the things that sounded crazy just a few years ago, he can definitely figure out the parking situation,” @teslaparkinglot said.

Teslas parking lot problems are partially a result of increasing workforce it’s had over the past two years. There are now 17,000 employees working in both offices (Palo Alto and Fremont), according to the WSJ. Musk has even admitted that parking is a problem.

“Parking is, like, one of my biggest nightmares — like, where do we park everyone,” Musk said in a recent earnings call.

Tesla told the WSJ that it’s trying to fix the problem by offering incentives to employees who bike or take public transit to work. The company is also thinking of assigning self-driving cars to drop off and pick up employees at the end of their shift.