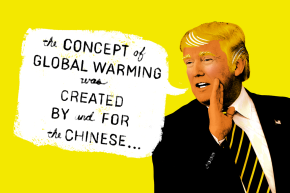 Trump Voters Do Care About The Environment, Just Not Climate Change
By Alasdair Wilkins

Trump Voters Do Care About The Environment, Just Not Climate Change

Focus groups of midwestern Trump voters reveal environmental issue do matter, as long as they can see their effects

Donald Trump struck an anti-environmental tone on the campaign trail, saying climate change is a myth and promising to dismantle much of the Environmental Protection Agency. His first three months as president suggest he meant what he said. But does that necessarily mean people voted for Trump because of his stance on the environment, or despite it?

The results of recent 12 focus groups shared with Vocativ suggest many Trump voters care a great deal about protecting the planet — at least until climate change gets mentioned.

The Chicago-based Environmental Law and Policy Center commissioned focus groups held in February and March in Indiana, Michigan, and Ohio, all of which went red in 2016. All participants voted for Trump, and all said they were somewhere in the middle when it came to climate change — none necessarily thought it was a hoax, as the president has claimed, but they also didn’t see it as a pressing issue.

“No matter what data you want to break out about climate change, you can’t disprove pollution: the garbage island in the Pacific Ocean, the Flint River,” said one participant. Indeed, the ongoing water crisis in Flint, Michigan, was a major topic of conversation for the midwesterners. For people who generally live in close proximity to rivers and the Great Lakes, water quality — both in terms of what they see in those bodies of water and what comes out of the tap —  is a tangible issue in a way climate change isn’t.

The report describes the participants as generally being small-government conservatives. Many members of the focus groups were frustrated with corporations they saw as shirking their responsibility to follow regulations and forcing taxpayers to pick up the bill for subsequent cleanups.

“[The EPA is] there for a reason,” said one participant. “If we didn’t have that and we didn’t have controls and accountability, how many manufacturing companies would be spilling into the rivers, would be damaging the soils, because that’s the best for their bottom dollar.”

Most participants voted for Trump because they believed he would create jobs. But unlike the Trump administration, the focus groups generally saw a lot of potential in clean energy to do exactly this. Many were unaware of how many local solar and wind energy businesses already existed.

“It’s like after the Great Depression: invest in infrastructure,” said a participant, suggesting wind farms and Tesla plants could provide long-term economic and environmental benefits. The Trump voter even repurposed the president’s campaign slogan: “Make America great again by bringing new jobs, not jobs that existed 50 years ago and don’t exist anymore.”

Climate change remains the big sticking point. Few saw direct evidence it was happening, with the exception of one man who owned a business that sells snow removal equipment. His falling sales figures have convinced him that climate change is real. Multiple participants saw climate change as a distraction from protecting the environment, however.

Some pieces of tangible evidence did speak to them, however. One participant brought up an article about polar bears stranded by melting ice. “To me, that was proof that there’s a change that has been happening that I can physically see,” the person said.

Ultimately, the focus group results suggest Trump voters are generally in favor of protecting the environment and building renewable energy infrastructure. The problem is more one of communication, and here the study returns to another frequent theme of 2016 postmortems: Right or wrong, a lot of Trump voters in the Midwest don’t like feeling like they are being lectured by elites in New York, Los Angeles, or Washington, D.C.

Keep the messages tangible and keep them local, and there might prove to be far more environmentalists in this country than anyone suspected — or indeed the election of Donald Trump would suggest.