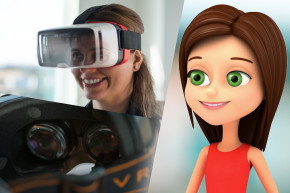 VR Headsets Can Now Recognize Our Emotions
By Alejandro Alba

Smile and your virtual avatar will smile

Virtual reality is able to transport us to a completely different world, let us face off robot invaders and interact with friends in chat rooms. However, VR has yet to let us effectively communicate our feelings while connected to a headset. MindMaze’s Mask is a product that aims to change that.

MindMaze, a neuroscience and computing company, developed a ring of sensors that can be installed inside any VR headset, recognize the user’s emotions, and transmit them into the game they’re playing. So if you were to smile, your avatar would smile. If you get angry and frown, the avatar would do the same.

The Mask uses electrode sensors that can detect changes in the face and skin and match the patterns to one of 10 baseline expressions including smiles, frowns, smirks and winks. However, the company is currently working on adding 30 other expressions.

“In social VR, the fundamental benchmark or baseline has to be emotion,” Tej Tadi, MindMaze’s CEO, told Vocativ. “Without us being able to express, we’re not going to be able to do anything in social VR.”

The Mask is predictive so there’s not much of delay, other than a typical rendering delay, according to Tadi. But it’s so precise that it’ll even track your blinking and mimic it in VR.

Tadi said MindMaze’s background is in health care, so the company is not trying to release Mask as a full consumer product. Instead, MindMaze wants developers for other VR headsets already on the market to use Mask. However, the Mask is already available for sale and can be purchased by anyone who is trying to develop emotion recognition VR software.

The hardware itself is not expensive. It could cost anywhere between $20 and $30, which is much cheaper than the headsets right now. Mask will most likely be used for gaming, but Tadi also sees it being used in the health care VR applications, such as therapy and rehabilitation programs.

MindMaze is not the first company trying to develop software that can recognize real world reactions and translate them to VR. Last year, Facebook’s CEO Mark Zuckerberg showed off how Oculus’ social VR platform could pick up on voice and body language cues and have virtual avatars mimic them. However, the cues were not based on facial recognition and were mostly reliant on voice and hand gestures.

Tadi said making Mask available to developers was the big first step, but the company will continue to work on developing software and hardware that can track more body gestures and eventually let users touch virtual things and feel them in the real world.  “We want to make these experiences much more real,” Tadi said.

In a way, MindMaze could be the first company to produce technology like the one seen in “Ready Player One,” which lets users feel their virtual surroundings in real life or interact with other avatars and sense their touch.

“If you know ‘Ready Player One’ it’s more of a love story than anything else — it’s not about the game itself,” Tadi said. “To get that type of experience in the real world the Mask is going to be fundamentally important.”