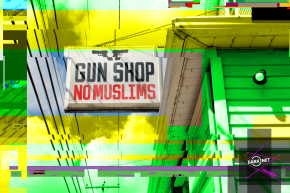 In his radio ad, Crockett Keller sounds like a kindly sheriff in a Western film. Keller is promoting a concealed-carry course he offers at his Mason, Texas, gun range. It’s family friendly, he says, and notes that all are welcome.

Well, not exactly all. “If you are a non-Christian Arab or Muslim,” he clarifies, “I will not teach you the class.”

Keller, whose radio advertisements air in this predominantly white town of 2,134 people, believes he’s devised a foolproof method to ensure Muslims don’t attend his course: “We will offer a prayer for our country and a safe class along with reciting the Pledge of Allegiance,” he says, going on to note that he does not believe in so-called political correctness. “If you don’t love and respect the United States of America, you’re in the wrong place!”

Keller’s belief — that Islam is fundamentally un-American — runs counter to the core American principle of freedom of religion. But his conception of American-ness as something white and Christian aligns with a long, shameful narrative. From the internment of Japanese-Americans during the Second World War to the “Whites only” lunch counters of the Jim Crow-era South, racial and religious exclusion has always been a part of how some Americans define themselves.

Now, in the nascent presidency of Donald Trump — a leader who’s made Islam a focal point of his stark “us vs. them” worldview — this mindset is thriving in some corners of society, including establishments like Crockett’s. “There is sort of a disturbing trend of businesses declaring themselves to be a Muslim-free zone – or declaring that they are going to decline services to people who are Muslim,” says Veronica Laizure, Civil Rights Director of the Oklahoma Chapter of the Council on American-Islamic Relations (CAIR).

Muslim bans are most frequently found in gun stores — “you don’t really hear of many Muslim-free bake shops or florists,” Laizure said. But anti-Muslim bias is on the rise throughout American society under Trump, she said. “Normalizing discrimination against American Muslims results in concrete acts of discrimination,” Laizure said. “We have seen increases in [discrimination] both here and nationally as a trend since the last presidential campaign.”

Gun store owners who ban Muslims typically say they do so for security reasons. (Despite the fact that you’re about six times more likely to be killed by lightning than by an Islamic terrorist on American soil.) Take Jan Morgan, owner of the Gun Cave in Hot Springs, Arkansas, who insists on her website that she bans Muslims from her store for her own safety. “The Koran (which I have read and studied thoroughly) and (which muslims align themselves with), contains 109 verses commanding hate, murder and terror against all human beings who refuse to submit or convert to Islam,” she wrote. She does not mention the abundance of passages in the Koran that call for peace, and the similar excess of violence in the Bible and other religious texts.

How do store owners like Morgan figure out which customers are Muslim? Unsurprisingly, one way is racial stereotyping. When a father and son of South Asian descent entered the Gun Cave, they were told by Morgan that it was a Muslim-free shooting range, and that if they were Muslim they should leave. When the father informed Morgan that they weren’t Muslims, the woman reportedly kicked them out anyway and threatened to call the police.

So far, most store owners who refuse to serve Muslims (or anyone they believe are Muslims) haven’t faced many legal consequences. But later this year, “Muslim-free zones” — which predate the Trump era — will face a test in court. Laizure is one of the attorneys working on a federal lawsuit against Save Yourself Survival and Tactical Gun Range, a gun store in Oktaha, Oklahoma, that posted a sign declaring itself a “Muslim free establishment.” In October 2015, Muslim-American U.S. army reservist Raja’ee Fatihah visited the range and planned to use the facility. At first, the staff was friendly to Fatihah, but after he identified himself as Muslim, the gun store owners picked up handguns and asked whether he was there to “commit an act of violence or as part of a ‘jihad,’” according to a statement by the American Civil Liberties Union, which is also representing Fatihah.

“There is no justification for a business denying people service based on religion,” Fatihah said. “I am a servant of my community in every respect and as a proud American I have enlisted in the U.S. Army Reserve to protect this country. I should be afforded the same rights and privileges as anyone else.” His case goes to trial this summer.

In 2015, CAIR filed a similar lawsuit against Andy Hallinan, owner of Florida Gun Supply in Inverness, Florida, who also declared his gun store a “Muslim-free zone,” posting the proclamation in his store window.

“I care about my community. I care about my family. I want to make sure who I put a gun in front of, are not going to use it to harm somebody in my community,” Hallinan said in an interview. “Here in America we have the right to refuse business to anyone we deem a threat for any reason.”

Hallinan became notorious nationwide for his headline-making sign — as well as the Confederate flag art fundraiser he organized with another infamous Floridian, George Zimmerman. “In my opinion, how the terrorists win is they get people like me to shut up. To sit down, get afraid of lawsuits – and shut up,” Hallinan said.

The Florida chapter of CAIR argued in its federal lawsuit that Hallinan’s store policy amounted to religious discrimination and violated the Civil Rights Act of 1964. But the claim was later dismissed by a U.S. district judge because there wasn’t a specific plaintiff in the case; CAIR had filed the suit on behalf of its members. 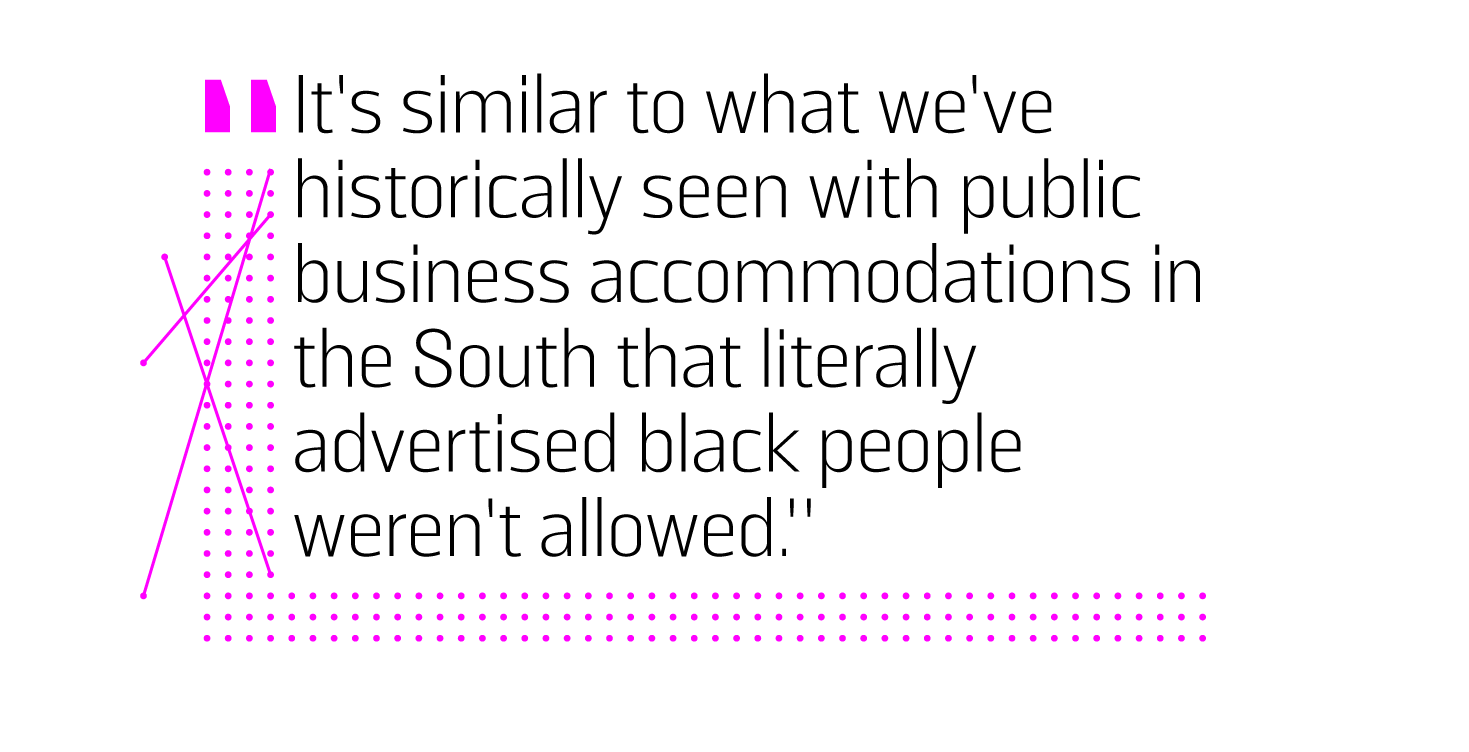 As Fatihah’s day in court nears, Laizure is feeling optimistic about CAIR’s case against the Oklahoma gun range. Unlike the case against Hallinan, CAIR has a plaintiff in Fatihah “who did suffer injury from being denied the services of the establishment,” she said.

Further, Laizure says, the law is clear: While freedom of speech allows businesses to post “No Muslims” signs, these stores cross the line when they deny services. “Under Title II of the Civil Rights Act, it’s illegal to discriminate against who can use your service if you’re a place of business, based on religion or race or national origin,” she said. “That is where they violate the law.”

“It’s unfortunately similar to what we’ve historically seen with public business accommodations in the South during the 1960s that literally advertised black people weren’t allowed,” she added.

The Oklahoma gun range is being represented by the same legal counsel that represented Hallinan, the American Freedom Law Center. The firm is run by David Yerushalmi, who has made the watch list of the Southern Poverty Law Center, a legal advocacy group that monitors hate groups. His legal credentials include defending such notables as Quran-burning pastor Terry Jones. Yerushalmi once stated that “the mythical ‘moderate’ Muslim who embraces traditional Islam but wants a peaceful coexistence with the West – is effectively non-existent’ and ‘most of the fundamental differences between the races are genetic.’”

Laizure and her colleagues believe they have the law on their side in the Oklahoma case — and hope the suit will send a message to any other store owners who feel emboldened under Trump to institute their own Muslim bans.

“We’re hoping [Fatihah’s case] will show American Muslims that they have the right to be served at businesses and not to be denied service because of their religion,” Laizure said. “We’re hoping that this case will establish more religious protection for Muslim Americans under Title II. And we’re hoping that this will have implications for other establishments that have decided to declare themselves to be Muslim–free in violation of federal civil rights law.”