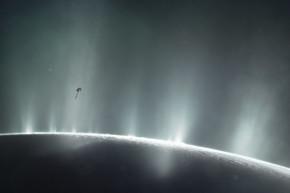 Their subterranean oceans harbor what is needed for microbes to thrive

Forget the question of whether we’re alone in the universe — these days, the real question is whether we’re even alone in the solar system. Mars has attracted plenty of attention as a possible home of life billions of years ago, but there may be other worlds where life could exist right now. As NASA scientists announced today, both Jupiter’s moon Europa and especially Saturn’s moon Enceladus could have all the necessary conditions for life in their subterranean oceans.

Writing in the journal Science, members of NASA’s Cassini mission to Saturn explain the probe found evidence of hydrogen gas in the liquid water ocean beneath Enceladus’s frozen exterior. This is crucial for life, as microbes could use hydrogen as a source of energy by combining it with carbon dioxide in the water. That’s how microbes survive near hydrothermal vents here on Earth, and there’s some thought such environments are where life began on our planet.

This discovery means Enceladus has nearly completed the checklist of materials needed for life to exist, as Enceladus’s ocean is confirmed to have liquid water and chemicals like hydrogen, carbon, oxygen, and nitrogen. All that’s potentially missing are phosphorus and sulfur, the other two elements essential to life, but NASA scientists are optimistic on this front. Enceladus appears to share much the same composition as meteorites that contain both those elements.

Either way, Enceladus appears to have all the food microbes would need in order to thrive. That’s the first time we can definitively say that about a world that isn’t Earth.

As for Europa, the Hubble Space Telescope has imaged two plumes of material shooting high above the moon’s surface — one was 62 miles high, another 30 miles high. Much like geysers on Earth, these plumes suggest a geologically active interior, as they are shooting out of the underground ocean through cracks in the moon’s icy exterior. Perhaps not coincidentally, these plumes erupted above an unusually warm region of Europa.

In a paper in Astrophysical Journal Letters, scientists from the Hubble mission argue all these factors make that warm, chemically active part of Europa an ideal spot to search for signs of habitability. NASA’s upcoming Europa Clipper mission intends to send both an orbiter and a lander to the moon in the early 2020s, and it should be able to explore this region in search of, if not signs of life, then at least signs of the potential for life. We’re still officially alone in the universe, but we have before never had more promising leads to find life on other worlds than we do on Europa and Enceladus.