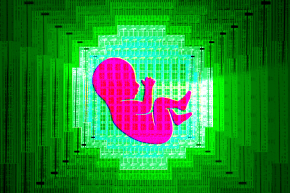 Can This Tiny Chip Prevent Preterm Births?
By Tracy Clark-Flory

Premature labor is a huge problem worldwide, and researchers say they have developed a device that can help predict it

The numbers on preterm birth are staggering. It is the No. 1 leading cause of death for children under the age of 5. In the U.S. alone, it is associated with costs of $30 billion each year and affects half a million babies annually — worldwide, that number balloons to 15 million. Despite its prevalence, and association with longterm health issues, doctors don’t have a reliable way to determine which women will be affected.

But now, scientists have developed a small chip that they say can predict preterm birth with 90 percent accuracy, according to a study published in the journal Electrophoresis. This wouldn’t eliminate early labor, but it would mean that at-risk pregnant women could take preventative measures, like bed rest or medication.

The chip, a piece of plastic that fits in the palm of your hand, can screen a small droplet of blood for a series of nine different biomarkers — or “biological flags,” as a press release puts it — that a woman is at risk for preterm birth, which occurs before 37 weeks of pregnancy.  “It’s like we’re shrinking a whole laboratory and fitting it into one small microchip,” said lead author Mukul Sonker, a Ph.D. student at Brigham Young University.

Currently, as co-author and BYU professor Adam Woolley explains, “the symptom of preterm labor is a woman goes into labor, and at that point you’re managing the outcome instead of trying to prepare for it.” He knows this well from personal experience: his wife started having contractions early on in the third trimester of pregnancy. Doctors were able to intervene so that she could successfully carry to term. “Ours was only a glimpse into the potential problems of a preterm birth, but it is still really satisfying to know that the research my students and I are doing now could help others in some way with this important medical issue,” he said.

The chip is still in development, but Woolley says that “it will help make detecting biomarkers a simple, automated task.” He added, “there are a lot of preterm babies who don’t survive. If we could get them to survive and thrive, it would be a huge gain to society.”