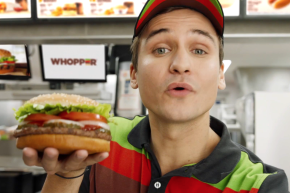 The brand is proudly on the vanguard of the IoT dystopia

UPDATE (3/13/17): Google has reportedly disabled the functionality on the Google Home so that it doesn’t respond to Burger King’s specific commercial.

It was only a matter of time before the corporate world found a way to highjack our voice-activated speakers and feed us unwanted advertisements. Burger King seems to be the first company to create a TV ad that is trying to deliberately activate your home speaker to promote its own product.

The fast food chain restaurant’s latest 15-second TV ad features an employee looking directly into the camera and saying, “Ok, Google…what is the Whopper Burger?” This of course, will immediately activate any Google Home within rage and provide feedback on BK’s signature burger.

Burger King president Jose Cil told BuzzFeed that the ad could also trigger Android phone that support Google’s voice assistant, which is a smart thing for BK to do, since Google Home is less popular than the Amazon Echo.

“We saw it as a technology to essentially punch through that fourth wall,” Cil said. “[It’s] a cool way to connect directly with out guests.”

It could also be a very clear way to annoy consumers, though. This is not the first time something like this happens — and it’ll certainly not be the last. On Super Bowl weekend, a lot of people were annoyed that Google’s commercial for the Google Home activated their own personal speaker at home with random requests, which Google says was not its intention.

Google Home commercial kept setting mine off! They need to chill it with the "okay Google"-ing.

Having companies create ads that invade our home speakers sets some sort of dystopian precedent for the future of Internet-connection devices. Aside from ads like this creating a disturbance, another issue is that voice-activated speakers like the Google Home fetch their answers from Wikipedia, which can be edited by essentially anyone. The Verge reported that Burger King edited the entry for Whopper a week prior to launch of its new ad so it could read more like an ad. However, the page seems to have been reverted back to its original text as of April 12.

“The Whopper is a burger, consisting of a flame-grilled patty made with 100 percent beef with no preservatives or fillers, topped with sliced tomatoes, onions, lettuce, pickles, ketchup, and mayonnaise, served on a sesame-seed bun,” read Burger King’s edit on the Whopper page.

Burger King’s commercial is already available online and expected to run in prime-time slots across the U.S. on networks including Comedy Central, MTV, E! and NBC — so be prepared for your Google Home to suddenly look up the definition of a Whopper.

Google was not involved in the making of the commercial, but it has been blamed in the past for using the Home as a platform for advertising “The Beauty and the Beast.” Google later said it wasn’t its intention to place ads as a feature.