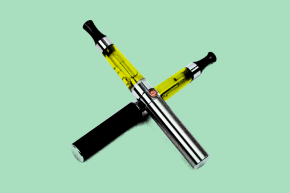 Many Turn To E-Cigarettes To Quit Smoking, Despite Lack Of Evidence
By Allee Manning

Many Turn To E-Cigarettes To Quit Smoking, Despite Lack Of Evidence

A new study from the Centers for Disease Control reveals that over a third of Americans looking to quit smoking are turning to e-cigarettes, even though there’s no proof these devices actually help serve that purpose. Despite the lack of evidence, they’ve become a more popular choice than using FDA-approved solutions or seeking the help of a medical professional.

While the study, published in the journal Preventing Chronic Disease, does not actually look at how effective the various methods of quitting proved for these smokers, past research has shown that e-cigarettes may not the best bet. At present, there is no published research that shows e-cigarettes can help wean smokers off nicotine.

Of the 15,900 study participants, most of whom explored various methods, far more chose to switch to or substitute e-cigarettes than to use FDA-approved medications like Zyban and Chantix. Partial substitution of e-cigarettes for cigarettes was also a more popular quitting method than the nicotine patch or nicotine gum, which also have dubious long-term impacts, among those who only used one quitting method.

True, e-cigarettes may well be safer than smoking (unless, of course, they explode or you accidentally let your kid get into your stash). They’re also a pretty decent alternative for those not quite looking to abandon nicotine altogether, but ready to ditch tobacco and other ingredients found in traditional cigarettes. But that doesn’t mean they curb users’ appetite for the traditional cancer sticks, as advertising materials from their manufacturers overwhelmingly suggest, both implicitly and explicitly.

It’s unlikely that e-cigarettes will receive the Food and Drug Administration’s seal of approval anytime soon, as the agency’s official stance that e-cigarettes should be overseen in the same way other tobacco products are as a catalyst for health concerns. This controversial designation belies the fact e-cigs are not tobacco products at all, something their proponents have called a dangerous generalization.