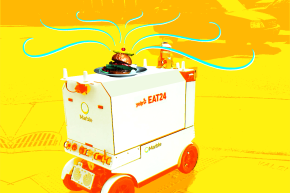 The Robots Are Coming To Deliver Our Dinner
By Alejandro Alba

The Robots Are Coming To Deliver Our Dinner

Would you give a machine a tip?

The day when you’ll order food and get it delivered by a robot is more quickly approaching. In the most recent development, Yelp Eat 24 has partnered with Marble, a company that creates “neighborhood robots,” to start testing food delivery by robot in San Francisco.

The new service allows customers to order via the Yelp Eat24 website — which is similar to Seamless — and then get their food delivered by a robot that looks like some combination of a moving office printer and a Mars rover.

Marble’s robot is ground-based and able to navigate autonomously to a customer’s address, but is only available in certain neighborhoods — probably those without any hills or potholes. Once customers opt-in for robot delivery upon ordering food, they get a pin texted to their phone so they can unlock the giant box when it’s at their front door. The robot will then return to its HQ or to make another pick up once it’s delivered its package.

“We’re starting with meals, but think our robots will be useful for everything from groceries, to pharmacy and parcel delivery in the long run,” Matt Delaney, CEO of Marble, told Techcrunch.

Marble’s delivery Wall-E look-alike still needs some upgrades, however. It is currently capable of navigating most urban terrain with its sensors, cameras, and night vision, but it’s still lacking temperature control to keep food hot and cold, which the company says its working on.

Yelp is paying Marble just like it would to any other delivery partner. Each delivery will come with a fee that goes to Marble. Any tips people give the machine will also go to Marble — but would anyone be compelled to tip a faceless robot?

For now, at least, human couriers won’t be out of a job. For the test trial, Marble is sending out human chaperones with the robots to make sure they get to their destinations and gather community feedback — but the ultimate goal is that they will eventually be removed.