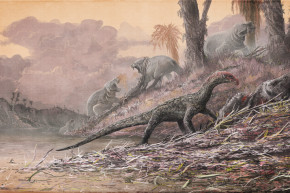 It’s fairly well-established now that birds aren’t simply the living descendants of dinosaurs — they are dinosaurs, albeit smaller and more airborne than the great reptiles that once roamed the Earth.

And just as birds represent the end of the dinosaurs’ story, paleontologists have speculated they were the beginning as well, with the immediate evolutionary ancestor of dinosaurs thought to be a small, birdlike creature. But a newly described species from 245 million years ago reveals the origins of dinosaurs actually looked a whole lot like a crocodile.

For the 135 million years comprising the Jurassic and Cretaceous periods, dinosaurs reigned supreme, but they were still supporting players during the preceding Triassic. The dominant land animals during this time, from about 200 to 250 million years ago, were known as archosaurs, which literally means “ruling reptiles”. These creatures were the most recent common ancestors of all dinosaurs — so all birds as well — and all crocodiles and alligators. An international team of researchers have just published in Nature a description of Teleoctrater rhadinus, which represents the first step on the path from archosaurs toward dinosaurs and birds.

It turns out the carnivorous Teleocrater looked far more like a crocodile than a bird. It measured about seven to 10 feet long, had a long neck and tail, and walked on four legs. It’s a far cry from what paleontologists had thought the earliest proto-dinosaur might look like, which is basically a tiny, two-legged, birdlike dinosaur.

The first Teleocrater fossils were discovered way back in 1933 in Tanzania, but there weren’t enough bones preserved for researchers to figure out just where the species belong on the archosaur family tree. Further finds in 2015 revealed telltale features, like its ankle bones, that made clear it belonged at a transitional point between archosaurs and later dinosaurs. Not that Teleocrater would have gotten to see its dinosaur descendants achieve total world domination — the species likely went extinct before dinosaurs emerged in the later Triassic.