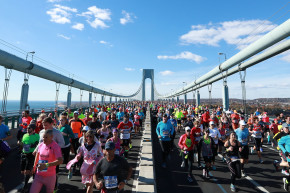 Big Marathon Races Linked To Deaths — Of People Not Even Racing

People who get a heart attack near a marathon's route have a tougher time getting care, a hospital record analysis shows

As marathons and half-marathon races have become increasingly massive and popular events, some scientists have begun to fret about the health risks of endurance running. But a new study published Wednesday in the New England Journal of Medicine suggests that it isn’t the runners we have to worry about, so much as it is the people watching them.

Researchers at Harvard University and the University of Utah studied the hospital records from 11 cities before, during, and after a major marathon had taken place during the years 2002 to 2012. They specially looked at seniors on Medicare who had come down with a heart attack or cardiac arrest and visited hospitals near a marathon’s course that same day.

Compared to non-marathon dates, these patients were 3.3 percent more likely to die, a small but significant increase the researchers estimated amounted to 3 or 4 more deaths each year in the 11 cities they studied.

Looking deeper, they found that the only difference between the groups was in how long it took for them to reach the hospital — ambulances on marathon dates were on average 4.4 minutes slower. Patients also more often drove themselves or were driven by someone else there, which probably delayed their arrival. These delays only occurred in the morning, further implicating, if not directly proving, that the marathon itself was to blame.

“The results were unexpected, but now that we found what we did, you can certainly trace out why they make sense,” senior author Dr. Anupam B. Jena, a professor of health care policy at Harvard Medical School, told Vocativ. “Lots of roads are closed, it’s difficult for people to get to the hospital in a timely fashion for acute medical emergencies, and those delays for even minutes could matter in terms of outcomes.”

The team focused on marathons because of their potential to widely, if temporarily, disturb people’s routines, making it a sort of natural experiment they could look in on.

“We had done a lot of earlier work on how natural experiments affect patients’ care,” Jena said. “And marathons are a really interesting example of how large public events, which create a lot of benefit for participants, can also have these unintended consequences for people living in the vicinity.”

Indeed, Jena speculates that any large enough public event, from Fourth of July celebrations to packed sports games, could create a similar pattern of delayed care, though theirs is the first study to look at a possible connection.

While Jena notes that many marathon organizers and city planners do take into account how planned routes could affect important services, he thinks more should be explicitly aware of their impact on health care. Practical steps taken in the future could include changing routes slightly or designating different hospitals for ambulances to drive to during a race, but these decisions should be made on a case-by-case basis, Jena said.

As for what you should do should you find unlucky enough to need the hospital on race day?
“If you’re having chest pains, shortness of breath, or you feel like you need acute medical care, you should always call 911,” said Jena. “But you should definitely do so on the day of a marathon or other large public event.”