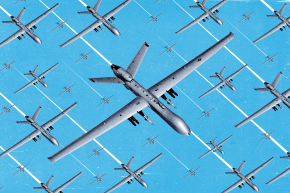 ‘Motley Crew’ Is The Unsettling Future Of Drone Warfare

The Navy will soon demonstrate robots that work together, developing their own collective strategy as they advance

Over the last several months, technology publications have been stoking fear over military drone swarms — a mass of autonomous robots that all fly together as if guided by one mind. But the Pentagon’s plans for collaborative unmanned systems goes beyond hive flight.

The military appeal of swarming drones is clear. Now, every Predator and Reaper drone has to be controlled by a pilot, which is a job the United States military has had difficulty filling and retaining. Drone swarms, on the other hand, could be overseen by one person. As a unit, they’re obviously more difficult to take down than a single drone. The Pentagon’s interest in drone swarms went public in January when it released a video of a Navy test of 104 micro-drones that flew together and completed assigned tasks.

Last week, at the Navy League’s Sea-Air-Space conference, Rear Admiral Mark Darrah, director of Unmanned Warfare Systems described the Navy’s vision for the future of drone warfare — masses of robots that work together, developing their own collective strategy as they advance. The Navy calls this concept “Motley Crew” and they expect to begin demonstrating it by 2018 or 2019, according to the military news site Defense Tech.

“Imagine, if you would, different weapons flying in the same airspace, communicating with each other, leveraging a best of breed from each of the weapons and able to make decisions … about which ship to go after, so they don’t target the same ship four times with four weapons,” Darrah said. “This is a breakthrough in my mind that we’ve got to get to.”

Darrah’s description of this robotic battlefield shows the extent to which these weapons could collaborate. “If one of those trackers loses a target, you could hand off the weapon they were controlling for a few miles to another set of controllers,” he said. “The bottom line is that you’re passing control of those weapons among multiple role-players the entire engagement. That makes you more lethal.”

Anti-autonomous weapons advocate groups are concerned about how these cooperative swarms will select targets, according to Peter Asaro, co-founder of the International Committee for Robot Arms Control (ICRC) and spokesperson for the Campaign to Stop Killer Robots. He said it depends on whether these drones are more akin to sophisticated guided missiles controlled by humans, or autonomous killing machines.

“If they are given approved target sets by human operators, and then decide amongst themselves the best tactical solution to engaging those targets among a network of connected devices, then it is a semi-autonomous system,” Asaro told Vocativ. “If, however, these networks are able to add targets to the set, based on their sensor data, or the processing of network data, and there is not requirement for humans to approve the addition of those targets, then it is an autonomous weapon according to the definition proposed by the ICRC. And such a system would be a serious concern.”

At least one defense development company is investing in the Navy’s Motley Crew concept. Last July, Boeing opened up a new Collaborative Autonomous Systems Laboratory, or CASL, in Missouri. Known colloquially as The Castle, this new lab focuses on building robots that work together without human guidance.