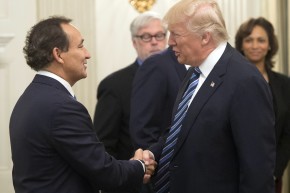 ‘He’s No Angel’ Story On United Passenger Enrages Everyone Again

If going viral for all the wrong reasons wasn't enough, the Louisville Courier-Journal is now digging up his past

The now-infamous video of Kentucky doctor David Dao being forcibly dragged off an overbooked United Airlines flight shocked and disgusted everyone who saw it, save Bill O’Reilly, and the fallout from the incident for all parties involved might only be beginning.

For United Airlines, it couldn’t be more deserving. The airline has a long history of aggravating its customers, and CEO Oscar Munoz provoked a second round of outrage after a series of tone-deaf non-apologies where he detailed Dao’s alleged misbehavior and described what happened as “re-accommodating the customer.” Today the company’s stock is in free fall.

But for the victim, the humiliation should have ended with the video, but in an ill-conceived attempt at reporting out the story, the Louisville Courier-Journal dug up a minor incident from Dao’s past and gave him the “he’s no angel” treatment.

David Dao, the Elizabethtown doctor yanked from United flight, has troubled past in Kentucky https://t.co/aFZLaExbmm

Dao hails from nearby Elizabethtown, and according to the newspaper, “is familiar to many Kentuckians who recall his convictions on drug-related offenses in 2004.” Setting aside the fact that it’s very unlikely that tons of Kentuckians remember a random story from well over 10 years ago, the incident in question has nothing to do with the fact that he was assaulted for refusing to volunteer to give up an airline seat he paid for.

The paper also makes no mention of the “troubled past” of United Airlines, which seems to be the source of a never-ending drip of negative stories, or the Chicago Police, which has a long history of racism, brutality, and corruption, in addition to having battered a doctor who was trying to get back to his practice to see patients in the morning.

The story was tweeted by the Courier-Journal at around 9:30 a.m. ET on Tuesday, and almost immediately Twitter users expressed outrage at the story:

.@courierjournal You should be ashamed of yourselves how dare you!

@emilysears @courierjournal Apparently you can now justify physical violence by smearing a person with something completely unrelated.

@Mike_P_Williams @KaleJPhoto @emilysears @courierjournal What is new about this? They do This every single time a Black person is murdered by the police! #stayWOKE