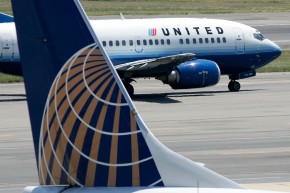 The company's shares dropped by nearly 4% on Tuesday morning

United Airlines stock is tumbling Tuesday morning, after a video of a bloodied passenger being dragged from an overbooked flight infuriated just about everyone.

Despite the initial anger online, the company’s shares still closed with nearly a one percent gain on Monday. The impact was felt on Tuesday morning, when shares had dropped more than 3.3 percent from the night before. The drop translates around $800 million in lost value.

Several passengers filmed the man being dragged off the flight by law enforcement, which took place on Sunday on a United flight from Chicago to Louisville. Passengers said the man was a doctor who needed to get home in order to treat his patients. United claimed the flight was initially overbooked, and law enforcement intervened after the man “refused to leave the aircraft voluntarily.” Oscar Munoz, the CEO of United Airlines, called the  event “upsetting” and apologized for “having to re-accomodate these customers,” in a tone-deaf apology that drew more criticism.

Many people said they’ll no longer be booking with United.

@united how about you fucking apologize for having a paying costumer beaten to the point out bleeding out of his mouth. wtf is wrong with u

The incident comes nearly two weeks after the company drew social media anger when it refused to let two girls board a plane while wearing leggings, a violation of their dress code for nonpaying passengers.