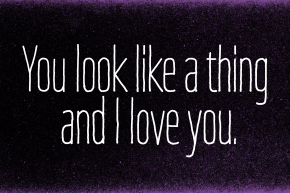 At The Bar? A Robot Wrote Some Pick-Up Lines For You
By Alejandro Alba

At The Bar? A Robot Wrote Some Pick-Up Lines For You

Some were cute and others nonsensical, and surprisingly, they weren't offensive

Pick-up lines are often offensive, raunchy, and just overall terrible, but apparently not when a robot writes them.

Research scientist Janelle Shane created a neural network framework — a computer system that thinks like a human brain — that can write new pick up lines based on patterns of existing come-ons it has learned. Although some don’t make sense, others turned out, she said, to be “adorable.”

The system learned the basics of pick-up lines, such as “hey baby, wanna…” and “you must be a (blank) because you’re a (blank),” but amazingly it never picked up on the sexist or degrading undertones of many traditional ones. Some of the pick-up lines it wrote were actually innocent and funny such as, “I want to get my heart with you,” “You are so beautiful that you make me feel better to see you,” a simple “Hello,” and Shane’s favorite, “You look like a thing and I love you.”

Shane told Vocativ that the most challenging part of the project was generating the dataset because of the shocking lines she had to read.

“I almost abandoned the project at the beginning when I was compiling the training list of lines since they ran the gamut from inane to aggressive to somewhat offensive,” she said over email.

This is not the first time that Shane builds a framework to generate random things. In the past, she’s created generators of recipes, Pokémon, superhero names and even Irish tune names.

Shane began playing with neural networks after she saw a list of absurd recipes by Tom Brewe, then decided to create the pick-up lines framework after having some drinks with friends.

“I realized that it might be pretty funny to read a computer’s attempt at wooing a human,” Shane said. “‘I have here a list of pick-up lines generated by neural network’ would be an excellent conversation starter and would probably work on me.”