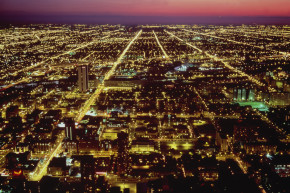 Some relatively good news in the constant battle against climate change: the U.S. managed to cut its carbon dioxide emissions by 1.7 percent in 2016, according to newly-released data from the Energy Information Administration.

As noted by Climate Central, the most significant change can be seen in carbon emissions from electric power plants, specifically. This is the second year in a row that this has fallen by five percent, and the first time that such a sizable change could be seen over the course of two years. Since 2005, carbon dioxide emissions at electricity plants have fallen by nearly a quarter. Experts say this is likely the result of inefficient coal-fired power plants being replaced.

The overall carbon decrease can be put down to a drop in pollution from coal used to generate energy and a decrease in coal use all-around in favor cleaner sources of energy (something President Trump has been pledging to fight aggressively). It is not, as EPA Administrator Scott Pruitt recently said, because of anything to do with “clean coal,” which refers to a carbon capture and transportation technique that is expensive, unfunded, and far from widespread in its use.

Another reason for this decrease that isn’t exactly something worth celebrating is an unusually warm winter, put down in part to climate change itself, the EIA said. Warm years can translate to less energy consumption because it requires more energy to heat buildings than it does to cool them. While official data has not yet been released, 2016 may have had the second-lowest number of days in which heat was needed for buildings in recorded EIA history.

While the electric power sector has been steadily reducing CO2 emissions, the transportation sector has been struggling with this issue. In 2016, transportation-related CO2 emissions actually increased by nearly 2 percent. This is a problematic trend that would require major changes to the American auto industry that are unlikely to be prioritized, given President Trump’s recently-ordered review of Obama fuel economy standards designed to lower our reliance on gas.