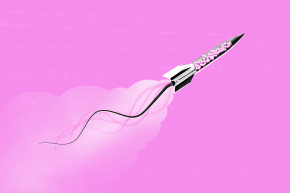 With the help of nanotechnology, sperm cells could one day deliver drugs to cervical cancer patients

Men’s little swimmers could do more than make a baby some day — they might fight off cancer and other diseases too. At least, that’s the tantalizingly bizarre possibility floated by a small group of German scientists.

Researchers at the Institute for Integrative Nanosciences in Dresden, Germany say they’ve found a way to weaponize sperm cells into drug missiles that can target a woman’s cervix, which is hard to reach with conventional drugs.

In their latest research, they doused sperm cells with anticancer drugs, then squeezed them into a flexible, laser-printed harness made out of iron. Afterward, they guided the sperm around using magnets, colliding them into tumor-like cells and masses. The sperm, with the help of four bendable arms attached at the top of the harness, then offloaded its delivery straight into the cancer cells, killing them. The harness did slow the sperm down, by around 40 percent, but not to the point of ruining their ability to deliver the drugs.

Thought only a proof-of-concept experiment, the team wrote that their sperm-driven hybrid micromotor, as they’ve coined it, “could lead to a new dosage strategy that allows high local doses of anticancer agents while reducing systemic toxic effects.”

A rendering of the team's "sperm-driven hybrid micromotor."

Scientists have been intrigued by the idea of using microscopic cells as drug mules for some time now. But other candidates, like bacteria or completely synthetic nanobots, have their share of drawbacks, according to the researchers. Bacteria, for instance, could trigger the immune system into attacking them en route to the delivery.

Sperm cells are already used to navigating the foreign terrain of a women’s reproductive tract, though, naturally producing chemicals that turn off any alarm bells to their presence. Better still, sperm cells’ entire purpose is to reach another cell, normally a woman’s egg, and fuse with it. That same principle, as applied to cancer treatment, makes them ideal carriers for chemotherapy drugs aimed at cervical, ovarian and uterine cancers. They even seem especially gifted at absorbing whatever they’re given, which could open the door to using them to carry other things too, like the chemicals that help doctors perform imaging tests or genes that can fix hereditary diseases.

Of course, there’s still a lot of unfinished work to be done before such a drug delivery system could become reality. The team’s experiments have only been done in the lab, under carefully controlled conditions, and using sperm taken from bull cattle, not humans. And their findings have yet to be published in a peer-reviewed journal. There’s also the matter of how the body will handle the discarded metal left behind afterward.