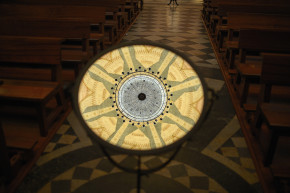 According to a new lawsuit, the Jesuit order forced unwed mothers into church-run homes to give birth and then forced them to put their babies up for adoption

The Basilica of Loyola, built around the birthplace of St. Ignatius of Loyola — Reuters
By James King
Apr 10, 2017 at 5:12 PM ET

A Washington woman has accused the Wisconsin Province of the Society of Jesus (Jesuit order) of running a “for-profit adoption conspiracy scheme” that caused her and hundreds of other unwed women to give up their babies over a period following World War II known as the “Baby Scoop Era,” when unwed women were often urged to put their children up for adoption against their wishes.

In the lawsuit, filed last week against both the Jesuit order in Wisconsin and the Catholic Archdiocese of Omaha, Kathleen Chafin claimed that she got pregnant in 1968 while a student at St. Louis University. Chafin says that after finding out that she was pregnant, a nurse from the student health center visited her in her dorm room and asked whether she intended on keeping the baby and whether her parents knew she was pregnant. The university then notified Chafin’s mother about the pregnancy.

Over the spring break recess that year, Chafin went home to Omaha where she says a priest visited her home and told her, amongst other disparaging remarks, that “giving birth out of wedlock was equal to murder,” and that “she was doomed to spend eternity in hell.” The priest, she claims, also told her that she had brought shame to her family by getting pregnant out of wedlock and that “she had damned her soul.” She claims she told him that she and the baby’s father were saving money to get married. The priest, the lawsuit claims, told her that any marriage would not have the blessing of the church.

In the lawsuit, Chafin claims she was forced to go to a church-run center for unwed pregnant women, where she says she “was forced into indentured servitude, cleaning, cooking and babysitting for members of the defendants’ organizations. That the end-game in this conspiracy was to provide babies for compliant couples in good standing with the defendants’ organizations under a for-profit adoption conspiracy scheme.”

It goes on to claim that Chafin “arranged for her grandmother to rescue her from this nightmare, but before that could happen, Chafin was drugged and tied to the birthing bed. That the baby was taken from Chafin at birth by members of the defendants’ organizations before she could hold him.

“That, after Chafin gave birth, and the baby was kidnapped, she was abandoned by the defendants,” Chafin alleged in the seven-page lawsuit filed on April 4, which also documents her claims of an attempted suicide after repeated and failed attempts to find her baby over the course of three decades.

The priest who forced Chafin into the home, according to the suit, was Father Thomas Halley, who was a co-founder of an organization within the church called the “Intercessors of the Lamb,” which was disbanded in 2010 due to the group’s unspecified “misdeeds.” Halley, Chafin claims to have to learned, was responsible for many similar adoptions of the children of unwed mothers who didn’t want to give up their babies.

“Chafin learned that Halley had conducted many other similar adoption kidnappings involving many other women with the help and consent and as a part of the defendants’ conspiracy of adoptions,” the lawsuit states.

In the lawsuit, Chafin’s attorneys point to other cases of the Catholic Church and other Jesuit organizations in places like Canada and Ireland forcing tens-of-thousands of unwed women to give up their babies in the 1950s and 1960s. It cites the case of Philomela Lee, who inspired the movie “Philomena,” which portrayed the pain these women endured after losing a child against their will.

The Society of Jesus was founded in 1534 by Spanish soldier turned priest Ignatius de Loyola, and by 1540 Pope Paul III approved it as an apostolic society within the Catholic Church. The “Jesuits,” as they’re commonly known, take on a vow of poverty, chastity, and obedience, according to Jesuits.org.

Chafin is seeking $3 million for mental, emotional, and physical pain. The church vehemently denies the allegations.