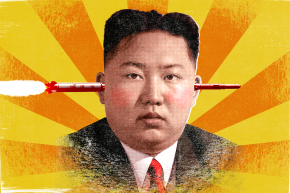 The United States Air Force is currently capable of intercepting a missile from North Korea — but that doesn’t mean it thinks it can sit back and wait as Pyongyang builds better weapons.

In recent months, North Korea leader Kim Jong Un has amped up threats of an attack against the U.S. — a response to what he sees as U.S. hostility. North Korea conducted its most recent missile test on April 4, a day before China President Xi Jinping met Donald Trump at Mar-a-Lago for a two-day summit. China is North Korea’s closest ally, and the missile launch highlighted the rift between China and the U.S. On Sunday, the U.S. Navy redirected an aircraft carrier and other warships toward the Korea Peninsula in response to Kim’s apocalyptic chest puffing.

Last Thursday, Gen. Lori Robinson told Congress she is confident North Korea ballistic missiles “can’t reach our homeland” right now and that if North Korea tries to fire a rocket at the U.S., the military has the anti-ballistic missile system in place to destroy the warhead. This was the extent of information reported at the time by the Associated Press. However, the entire testimony shows that the Air Force is eager to improve its technology to keep up with North Korea’s missile development.

“Amidst an unprecedented pace of North Korean strategic weapons testing, our ability to provide actionable warning continues to diminish,” Robinson told the Senate Armed Services Committee, according to military news site Defense Tech, adding that the country’s isolation presents even more complications. “North Korea’s closed society and robust denial and deception capabilities challenge our ability to observe missile and nuclear test preparations, a concern that would be exacerbated in crisis or in wartime and complicate our ability to defend the United States.”

Robinson, who is both commander of U.S. Northern Command and commander of North American Aerospace Defense Command (NORAD) is particularly worried about what will happen when North Korea transitions from liquid-fuel to solid-fuel rockets, which can be prepared faster. When North Korea tested a missile on February 11 — as Trump was hosting Japan Prime Minister Shinzo Abe — Pyongyang announced the missile used solid fuel. Experts believe that by 2020, North Korea will likely be able to launch intercontinental ballistic missiles.

2020 is also the year that the U.S. expects to complete construction of the Long Range Discrimination Radar (LRDR), an advanced missile defense system that will be able to detect missiles and deploy anti-ballistic missiles. LRDR is supposed to be able to discern between decoys and nuclear warheads. In 2015, the Pentagon paid Lockheed Martin $784 million to develop the system, which will be based in Alaska.

Even though Lockheed was given an aggressive schedule, Robinson said last week that LRDR is still “on track.” But she said she would still invest a lot more on anti-missile defense if she could. The committee asked what Northern Command would do if it had an extra $1 billion and Robinson responded: “Putting the right radars in the right place. That’s where I would go first.”