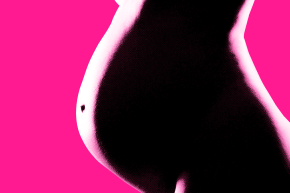 Summer Sebastian, a worker at The Bunny Ranch, announces she plans to continue working throughout her pregnancy — and blogging all about it

In most ways, Summer Sebastian is just your average woman blogging about her pregnancy. Her first blog entry catalogues hormonal changes, shares an ultrasound photo, and talks about how her pregnancy is affecting her work. It’s just that the 30-year-old’s workplace happens to be The Bunny Ranch, a legal brothel in the state of Nevada. Sebastian, who is in her second trimester, plans to “publicly, regularly and most of all proudly” blog about her experience as a “prego-working girl” — right up until she gives birth.

“It actually never occurred to me that I would stop working at the Bunny Ranch while I was pregnant,” she writes in a post on the brothel’s blog. And as Vice reports, she simply needs the money to pay to finish her master’s degree and to support her two daughters. But more than that, she says her decision to keep working, and go public about it, is political. “I want to make a statement that supports the right of a woman to choose…to work as a prostitute while pregnant!”

If the past is any indication, Sebastian’s decision is likely to garner a frenzy of outrage. In 2008, Alana Love began working at the Bunny Ranch while seven months pregnant and, just like Sebastian, she blogged about the experience. She landed on an episode of The Howard Stern Show, where she was asked to strip down to reveal her belly and swollen breasts; she was chastised by an outraged Tyra Banks (“that’s the only option for you to support your child?”); and she was targeted in shaming blog posts from lady mags (“Have a little pride!”). The media frenzy about Love’s decision was no surprise — pregnancy alone seems to invite intense judgements around a woman’s choices (even if it’s just having an occasional glass of wine) and, for many, somehow render her body no longer her own (see: anti-choice rhetoric). Add sex work to the mix, and oh boy.

But, of course, Sebastian knows how her news will be received. “[I]f society already looks down on me for being a working girl (even though legal), you can imagine what they will probably think of a pregnant working girl!” she writes. “Even other working girls sometimes look down on pregnant working girls. But I’ve never been one to let myself be intimidated by what others thought!”

Sebastian makes the point that sex during pregnancy is safe. Indeed, contrary to the many surrounding myths, sex is typically an A-OK — and even beneficial — activity while gestating a human. It is true, however, that sexually transmitted diseases pose special risks for pregnant women. “The results of an STD can be more serious, even life-threatening, for you and your baby if you become infected while pregnant,” according to the Centers for Disease Control and Prevention. Suggested methods for protecting against STDs during pregnancy include being in a long-term mutually monogamous relationship and using condoms, which are required at the Bunny Ranch.

While many women find that their pregnancies come as unwelcome news in the workplace, it seems that Sebastian’s pregnancy is something of a boon for business. The Bunny Ranch’s website features photos of all of its workers, and Sebastian’s image is overlaid with the screaming text, “PREGNANT!” As Sebastian writes, “[A]dding this creative component to my parties with my clients has just made sex that much more exciting, and interesting!” she said. “I’ve had no issues at all! And kissing and caressing—go for it!—I’ve gone from being the QUEEN of GFE to being the Pregnant Girlfriend Experience!” She adds, “I know being with a pregnant girl sexually is a HUGE sex fetish for a lot of people, and I sure hope to accommodate you over the next six months!” Indeed, there is a whole genre of pregnancy porn, where round bellies are worshipped.

While Love seemed somewhat conflicted about her choice, Sebastian sounds downright enthusiastic. “I’m so glad I have decided to share this beautiful gift and experience with all of you,” she writes. “So stay-tuned as Summer Sebastian, your ‘sweet, petite treat,’ keeps you updated, and we can count down to the nine-month magical day together!”