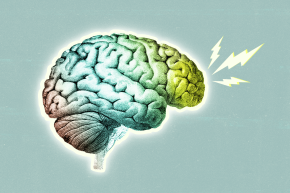 People were more honest when their brains were stimulated, even when lying would have made them money

What makes people tell the truth, even when they have more to gain by being dishonest? Certainly, society puts plenty of effort into getting people not to lie. Pretty much all major religions, moral codes, and laws condemn it, and kids grow up on corny cliches like “Honesty is the best policy.”

Yet despite all those efforts, dishonesty remains commonplace, and the question of whether people tell the truth may just come down to a particular corner of the brain — a corner that researchers have now been able to stimulate, seemingly making people more honest.

Writing in the Proceedings of the National Academy of Sciences, neuroscientists at the University of Zurich and the University of Chicago pinpoint where in the brain these calculations happen and shows it can be manipulated.

A 2009 study traced that form of decision-making to a part of the prefrontal cortex. This new study stimulated that particular region of participants’ brains as they reported the result of 10 rolls of the dice. For each roll, half the possible outcomes could earn them about nine dollars, meaning the participants had good incentive to misreport the results in their favor. Participants who didn’t receive any neural stimulation reported a money-making roll 68 percent of the time, with about one in 12 participants claiming 10 successful rolls. All of which is way above what you would expect from random chance, and a good indication that lying was rampant in the study.

For those who received stimulation directly to the prefrontal cortex, the reported success rate was only 58 percent — still more than what random chance would dictate, but significantly more honest. Intriguingly, these participants reported far fewer cases of seven, eight, or nine successful rolls, but once again about one in 12 participants said they had had 10 successful rolls. This suggests this kind of stimulation doesn’t work on the most audacious liars, those who put little or no thought into the trade-off between honesty and financial gain and just cared about making as much money as possible.

Further tests helped isolate this effect, so that the researchers can claim with some confidence that it really is this part of the brain that governs how honestly people behave when lying can mean personal gain — assuming people experience a conflict between those two motivations in the first place.

Exactly how this research is applied in future is an open question, with the authors suggesting it could “be important for the development of measures to promote honesty.”

They take the time to point out the trillion-dollar consequences of dishonesty in the form of tax evasion and bribes, to say nothing of the deceitful lending practices that fuel economic meltdowns like the 2007 financial crisis. The United States alone loses about $340 billion a year from tax evasion, meaning there’s a whole lot of people whose brains are struggling to prioritize honesty over personal financial gain.

But considering such measures would presumably involve zapping people’s brains into greater honesty, this does sound at least moderately Orwellian.