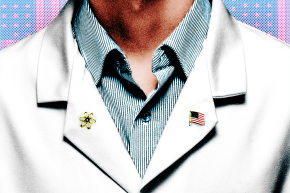 There's a failed history of scientists trying to get political, but this time could be different

In November 1952, an Israeli diplomat traveled from Washington D.C. to Princeton, New Jersey, to deliver a letter asking the world’s greatest physicist to accept the presidency of Israel. Albert Einstein politely refused, citing both his age and his belief that his scientific background left him ill-prepared for politics.

“All my life I have dealt with objective matters,” he wrote, “hence I lack both the natural aptitude and the experience to deal properly with people and to exercise official functions.”

Judging by how few scientists have historically gone into politics, most would seem to agree with Einstein. In the previous Congress, there were just three scientists, compared with 18 bankers, 19 insurance agents, 22 public relations professionals, and six car dealership owners.

But that traditional reluctance of scientists to stay away from politics is quickly changing in the age of Trump. Not only is the Republican-led administration and Congress poised to cut research grants and science budgets and repeal environmental laws, there is also a feeling that the entire scientific enterprise — drawing conclusions based around evidence and data — faces a more existential threat.

“Policy is being made without any consideration for the scientific aspects. Facts are considered optional in public debate,” said former congressman Rush Holt, a particle physicist who represented New Jersey’s 12th district from 1999 to 2015.

On Saturday, tens of thousands of people are expected to march in Washington D.C. in support of science, with thousands more planning to join in satellite marches spread across every continent except Antartica. More than 200 scientific organizations have officially partnered with the March For Science, which officially calls itself non-partisan. That includes the American Association for the Advance of Science, the world’s largest scientific society, of which Holt now serves as the chief executive officer.

While the march represents a single rally in support of science, some with science backgrounds are considering a more long-term political commitment. Holt told Vocativ that more scientists than he could ever remember were approaching him about entering politics. Their concerns, he said, were more fundamental than any particular policy or budget line item, but instead about deeper fears. “They feel that evidence is being disrespected.”

This feeling is what led Shaughnessy Naughton, a trained chemist and a 2014 congressional candidate in Pennsylvania, to launch 314 Action. While it launched last October as an advocacy group for science issues generally, it shifted its emphasis in the wake of Trump’s election to helping Democrats with science backgrounds run for state or national office. The group will hold an online training session on April 20, and 3,000 people with science and engineering backgrounds having signed up to learn about what it takes to run for local, state, and even national offices. The organization will look to support some candidates as soon as this November, including the statewide races in New Jersey and Virginia.

“Traditionally, people in scientific fields have looked at politics as dirty and science as being above politics,” Naughton told Vocativ. “Increasingly, science is under attack, and I think it’s important to get people with these backgrounds to run for office and be successful.”

While the science march is officially nonpartisan, not so 314 Action, which will only support Democrats. By the group’s own reckoning, they are helping scientists fight back against the Republican Party’s war on science, with widespread climate denial perhaps the starkest example of the GOP’s anti-science mindset.

Still, it’s a mistake to think science is somehow inherently left-wing, or always an enemy of the Trump administration — after all, those who designed and built the massive bomb the Trump administration just dropped in Afghanistan are scientists and engineers every bit as much as those who are seeing their climate research marginalized. Einstein himself knew that better than most how dangerous science could be: Nazi-era race “science” is what eventually forced him to flee Europe, and he deeply regretted even his minor role in developing the atomic bomb.

Illinois Rep. Bill Foster, a physicist who previously worked for 22 years at the Fermi National Accelerator Laboratory, has some experience in what Naughton is attempting to do with 314 Action.

In 2011, between his first and second stints in Congress, Foster briefly explored starting a group called Albert’s List, before threatened litigation by the holders of Einstein’s naming rights led him to drop the name. The planned group was modeled on Emily’s List, which provides early funding to pro-choice Democratic women — though unlike both Emily’s List and 314 Action, Foster said his group likely would have supported scientists from across the political spectrum, prioritizing a scientific outlook over specific policy positions.

A scientific mindset might often lead to more left-leaning political beliefs — Foster said it’s no secret that most scientists are Democrats like he is — but he said more politicians should look to scientific data and evidence in their decision-making, even if they still ultimately support conservative policies. “I think it’s wise to separate an insistence that scientific principles be followed in our public policies from political conclusions,” he told Vocativ, “which almost always follow from a mixture of scientific and nonscientific consideration.”

Efforts to mix science and politics have long danced around the question of how explicitly scientists should oppose a Republican Party that has grown increasingly hostile on issues like climate change. Science Watch, a 1996 effort to score how pro-science House members were based on voting records, came under harsh criticism from GOP lawmakers for giving generally high scores to Democrats — who voted overwhelmingly to fund government science — and low scores to the more fiscally conservative Republicans. Only the 1996 edition of the report card was ever issued.

Science Watch only dealt with issues of funding, but the 2004 presidential election saw some scientists take a more overtly political stance against the poor scientific and environmental record of President George W. Bush by founding an advocacy group called Scientists and Engineers for Change. On a conference call with reporters at the time, internet pioneer Vint Cerf said that, as a scientist, he believed the facts would speak for themselves, with no need to get explicitly political or endorse Bush’s opponent John Kerry.

“The way I like to work is simply to lay out what I think the issues are and what the consequences are of various choices,” Cerf told reporters, “and then we rely on the voters to make up their minds.”

After USA Today’s Jill Lawrence quickly challenged this apparent hedging, Cerf acknowledged that scientists could at times be too subtle for the political arena. Just as nature abhors a vacuum, scientists can abhor a clear, declarative statement —which can prove a problem for those scientists who make the transition into politics.

“One of the things that is most difficult is to explain to the political world [is] what the meaning of scientific uncertainty is,” Rep. Bill Foster told Vocativ.

He pointed out that very few legitimate scientists are 100 percent certain that humans cause climate change —there are always experimental and theoretical uncertainties — but that measure of academic caution can give climate denial all the daylight it needs.

“[It] makes it easy for politicians to say, ‘It’s all garbage, just throw it all away, come back to us when you’re absolutely sure.’ And that’s a tough situation that you find yourself in,” he said.

Even so, there are many times a scientific background can prove vital to a politician, like when Foster’s physics background helped him talk to Democrats and Republican about the finer points of the 2015 Iran nuclear deal. A scientist’s technical and quantitative mindset can also be useful even when the issue isn’t strictly scientific. “That comfort level is worth a lot,” Holt said.

It’s also not easy to convince scientists in their most fruitful years — perhaps chasing a world-changing discovery — that a potentially failed campaign is worth their time, Foster said.  Holt suggested scientists frequently face a psychological hurdle in running for office, falsely believing science is pure and politics is dirty. It’s perhaps not a coincidence that both Holt’s and Foster’s parents had political backgrounds, making them less averse to getting involved in the first place.

More Study: Most People Think Scientists Are Full Of It

Still, scientists in office, even the highest offices, are not unheard of. German Chancellor Angela Merkel wrote several papers on quantum chemistry during her years as a research scientist and has often stressed the importance of research funding. The late British Prime Minister Margaret Thatcher studied chemistry at Oxford University under future Nobel laureate Dorothy Hodgkin, though the most obvious influence of Thatcher’s decade as an industrial scientist was simply to crystallize her unbending belief in free-market policies. President Jimmy Carter would introduce himself on the campaign trail as a “nuclear physicist and peanut farmer,” the former in reference to his naval training in reactor technology before serving as senior officer onboard a nuclear submarine. Carter went on to found the Department of Energy, the U.S. government’s primary home for scientific research.

But these scientist politicians remain exceptions, outliers among all the former lawyers and businesspeople, and 314 has an uphill battle. Most previous larger-scale efforts to recruit scientists to run for office have failed. Scientists and Engineers for Change didn’t stop George W. Bush’s reelection. Its successor organization, Scientists and Engineers for America, folded in 2011. And Albert’s List never really got past the idea stage, though this was largely because Bill Foster decided to run for a new seat and reentered congress in 2013.

Foster believes the appetite for such a group remains there, but establishing it would take years — Emily’s List, for instance, took about a decade to achieve the multi-million fundraising it now commands during election cycles.

That is probably what the road ahead looks like for Shaughnessy Naughton and 314 Action. This particular moment in history has scientists thinking about politics more than ever before. Whether 314 Action and other science activists can sustain that momentum after the initial shock of the Trump administration wears off is a question that will likely take more than one election season to answer.