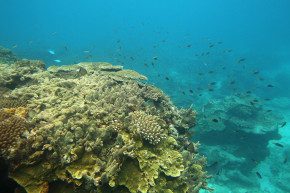 The recent mass bleaching events, which have destroyed two-thirds of the reef, could be "terminal"

New aerial surveillance of the Great Barrier Reef has revealed that two-thirds of the world’s largest coral reef has been damaged by unprecedented bleaching, and that repercussions could be severe. At least 900 miles of coral reefs have been affected.

The assessment, which was conducted by the ARC Centre of Excellence For Coral Reef Studies, has led those involved to “anticipate high levels of coral loss” following two straight years of coral bleaching. The coral bleaching responsible for this potential loss occurs when ocean conditions like temperature, light, and nutrients change. It is the first time in known history that severe coral bleaching has occurred two years in a row. Prior to 2016, the last observed coral bleaching had occurred in 2002.

While El Niño played a role in some of the mass bleaching that occurred last year, scientists attribute the more recent damage solely to global warming. In a press release, the director of ARC noted that the only way to prevent future loss to the reefs is by cutting carbon emissions, and that “the window to do so is rapidly closing.”

Last month, scientists discovered that the mass bleaching of the reef had indeed occurred for the second year in a row, but this development helps show the true extent of the damage. Now, researchers involved in surveying the reef have confirmed that the northern and middle thirds of the Great Barrier Reef have been impacted. This means that the damage incurred last year stands virtually no chance of the necessary of being salvaged. Adding to the bad news, scientists note that a recent tropical cyclone that may have have provided some relief to damaged parts of the reef with its cooling properties proved negligible when it instead struck a previously undamaged section of the reef.

In an interview with the Guardian, one water quality expert referred to the reef as being in an “terminal stage.” However, an update from the Australian Government’s Great Barrier Reef Marine Park Authority published last week seemed more optimistic. Dr. Russell Reichelt, chairman of the authority, noted that the bleaching damage “is not a death knell” and emphasized that scientists are working to find more long-term innovative solutions for coral recovery.