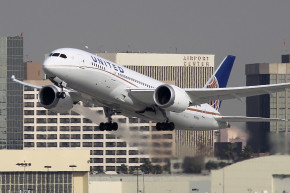 After no one volunteered to get off the flight, law enforcement dragged a passenger away

Just when United Airlines thought the PR mess that arose from not allowing girls wearing leggings on a plane was behind it, it decided to deal with an overbooking situation by forcibly dragging a passenger off the plane.

The incident, which occurred on a Sunday flight from Chicago to Louisville, was captured on video by the unnamed man’s fellow passengers.

@united @FoxNews @CNN not a good way to treat a Doctor trying to get to work because they overbooked pic.twitter.com/sj9oHk94Ik

Tweets from another person claiming to be a passenger shared a similar story.

@United_Airline holding up our flight to Louisville until four volunteers to take a flight tomorrow. #what??

@United flight 3411 forcing four people off the airline and holding up Flight to get four crew members to Louisville.

@united bringing on the police to evacuate passengers so they can send four crew members to Louisville. Flight 3411

@united just had the police forcefully remove an older passenger, medical Doctor, who had to work tomorrow.

Passengers claimed the man who was forced off the plane was a doctor who said he needed to be at a hospital tomorrow. He appeared to be bleeding from his lip as he was dragged off the plane. Passenger videos showed him running back onto the plane, repeating “I have to get home.”

While United’s social media team initially said the video was “very concerning,” the airline later confirmed that the flight was overbooked and with no one volunteering to give up their seats, “law enforcement” was deployed.

“Flight 3411 from Chicago to Louisville was overbooked,” a spokesperson for United told Vocativ. “After our team looked for volunteers, one customer refused to leave the aircraft voluntarily and law enforcement was asked to come to the gate. We apologize for the overbook situation. Further details on the removed customer should be directed to authorities.”

United would not say if airline employees needed the seats that it forced the passenger off the plane for, as some passengers claimed.

Chicago’s O’Hare airport did not immediately respond to request for comment.

The Louisville Courier-Journal reported that after the incident, all of the passengers had to leave the plane so the crew could “tidy up.”

According to FlightAware, Flight 3411 took off two and a half hours after its scheduled departure time.