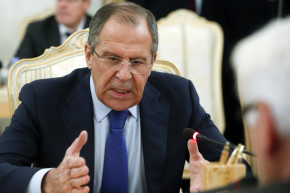 ‘Punch Him In The Eye’: Furious Russians Await Tillerson’s Visit
By Jacob Steinblatt

‘Punch Him In The Eye’: Furious Russians Await Tillerson’s Visit

Russian media and citizens think their government should get confrontational with the U.S. following missile strikes on Syria

The Russian press is furious after US missile strikes targeted a Syrian airfield on Thursday, and, judging by social media sentiments, so are many regular Russians — setting the stage for a tense visit by Secretary of State Rex Tillerson later this week.

Secretary Tillerson spoke with his Russian counterpart, Foreign Minister Sergei Lavrov, in a call on Saturday, which Russia’s Ministry of Foreign Affairs claims was initiated by the Americans. Tillerson is expected to arrive in Moscow for face-to-face discussions on Wednesday. News of the planned meeting, Tillerson’s first as secretary, was published prior to the American missile strike, though the attack on Syria is now likely to be front and center.

The meeting was initially expected to test President Trump’s desires for closer ties with President Putin, but now many Russians are clamoring for Lavrov to confront Tillerson.

Russia’s media slammed the missile strike, with newspaper headlines stating that the strike was “more than a mistake,” and that the U.S. is working “on the side of terrorists.” Before the strike, the Trump administration had stated its priority was to work with Russia and the Assad regime to fight ISIS in Syria. Opinion pieces flooded the Russian press claiming that American diplomacy is illogical, and that Washington can’t lead negotiations for a peace deal in Syria.

Meanwhile, on Russian social media, hundreds discussed Lavrov’s conversations with Tillerson, and many believed that negotiations would be futile. “When Tillerson comes to Moscow, I suggest Lavrov punch him in the eye, and then offer talks on Syria,” one user on the social media network VKontakte posted.

Another user stated, “It would have been better if he [Tillerson] did not come to Russia. Without the Americans, it’s calmer, and wherever they are awaits trouble and sorrow.”

“What kind of negotiations?” A third user asked. “There will be no negotiations. Tillerson will accuse us all collectively.”

Russia is one of the Syrian regime’s oldest and closest allies, and has provided Syrian President Bashar al-Assad with significant military and diplomatic support. Speaking on Friday, Secretary Tillerson blamed Russia for allowing Syrian forces to use chemical weapons, saying, “Either Russia has been complicit or Russia has been simply incompetent.” President Trump told the nation a day earlier that the US was obligated to respond to the chemical attack, saying that preventing the use of deadly chemical weapons was a “vital national security interest.”