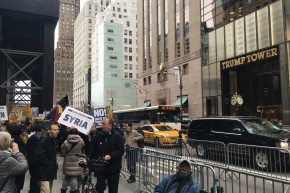 Two demonstrations were held in New York City on Friday, including one at Trump Tower

More than 20 U.S. cities held protests on Friday in response to President Donald Trump’s military action against Syria. Two demonstrations were held in New York City on Friday evening — one at 5 p.m. in front of Trump Tower on Fifth Avenue, and another at 6:30 p.m. in Union Square.

The rally at Trump Tower was organized by the ANSWER Coalition (ANSWER stands for Act Now to Stop War and End Racism), an organization devoted to opposing war and racist and religious profiling. Wielding signs that read “Endless War for Empire” and “Yes to the refugees, No to the U.S. wars that create them,” demonstrators gathered across the street from Trump’s business headquarters in the heart of Manhattan. Police on the scene outside Trump Tower estimated that roughly 100 people were in attendance.

Late Thursday evening, Trump ordered the bombing of a Syrian government airfield with 59 cruise missiles in response to a poison gas attack conducted by Syrian President Bashar al-Assad that killed dozens of civilians.

David Havrenek, an organizer with the ANSWER Coalition, told Vocativ that the president’s actions represented a continuation of what he viewed as the country’s questionable foreign policy.

“It’s not just about the bombings in Syria, but general U.S. policy in the Middle East, driven by greed and corporate benefits,” he said. “I think that not only is it wreaking havoc across the Middle East, but this issue affects us domestically because were spending a lot of money, sending young Americans overseas to fight — that does not benefit the working class of the U.S. at all.”

People protest outside of Trump Tower in New York on April 7, 2017.

Voi Dipoko, a volunteer with the organization Refuse Fascism, was handing out fliers at the Trump Tower protest. She said she took issue with the fact that Trump acted unilaterally and has tried to deny, with his two executive orders on travel, the entry of Syrian civilians to the U.S.

“He’s bombing the Syrian people, the same ones the U.S. is turning into refugees, then banning them,” Dipoko said. “It sends out a clear message.”

Karen Lee said she attended the protest because she’s against the attack on al-Shayrat Airfield, and because Trump acted without consulting Congress.

“Drumpf already said himself that he would not be doing this when he was campaigning back in 2013, so basically he’s lied to the public, and Congress has already turned a blind eye to their obligation to the United States,” Lee said, using Trump’s ancestral last name, revealed and popularized by comedian John Oliver. “Their inaction is abominable.”

Susan McDonough, a tourist from San Francisco who heard about the protest online from her daughter, aired disappointment about Democrats’ seeming support for Trump’s strikes.

“I just felt I had to do something. I’m pretty discouraged with the Democratic Party; all their criticism of Trump, and then they just roll over,” she told Vocativ. “I’m appalled.”

Also on Friday night, around 400 people gathered in Union Square for a protest started by the International Action Center, a New York-based NGO. In a media release posted to the protest’s Facebook event page, the group questioned the validity of the claims that Syria conducted a chemical attack, and compared the event to the Gulf of Tonkin resolution in 1966, as well as the George W. Bush administration’s 2003 claim (which turned out to be false) that Iraq had weapons of mass destructions.

“Protesters will reject this latest attack on a poor country coming on the heels of hundreds of civilian deaths at the hands of U.S. airstrikes in Mosul, Yemen and Syria itself,” the group wrote. “The hypocrisy of Washington — whose military possesses the world’s largest stockpile of chemical, nuclear, biological and conventional weapons — launching more airstrikes to stop the use of chemical weapons is staggering, and shows the true intent: regime change.”

On Thursday night after the strikes were conducted, Trump said his actions were necessary to maintain national security.

“Tonight, I ordered a targeted military strike on the air field in Syria from where the chemical attack was launched,” Trump told reporters at Mar-a-Lago. “It is in this vital national security of the United States to prevent and deter the spread and use of deadly chemical weapons.”

More protests are planned for Saturday and Sunday.