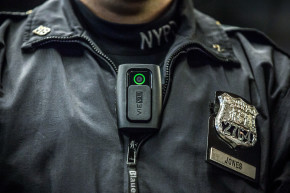 Only Cops, Not Public, Will Have Easy Access To NYPD Body Cam Footage
By Kevin Collier

Only Cops, Not Public, Will Have Easy Access To NYPD Body Cam Footage

The U.S.’s largest police force is finally rolling out police body-worn cameras — but footage will mostly be for cops’ eyes only.

The New York City Police Department unveiled its draft guidelines on body-word cameras (BWCs) on Friday, as promised by Mayor Bill de Blasio in January. An upcoming pilot program, mandated by a 2013 federal court order, will initially outfit 1,000 officers with the technology, but de Blasio has promised every cop on patrol will wear one by 2019.

Though both de Blasio and the NYPD have touted the measures as a way to increase police accountability and win back the public’s trust, the guidelines are decidedly one-sided when it comes to who gets to see the footage.

Officers have wide privileges to view footage, even footage shot by other officers, for investigations or prior to making any kind of statement or report. Civil rights advocates are concerned this could allow an officer to match his or her version of events to what’s on film. Citizens, however, have no mechanism in the rules to view footage, even if it concerns them.

That discrepancy is concerning to some civil rights advocates. “Since the NYPD insists that its officers will be able to review footage, it’s only fair that the public, including people who have been arrested or who file complaints against officers, be given access, too,” the New York Civil Liberties Union said in a release sent to Vocativ.

“Public support for body cameras will not last if the technology becomes just another gadget to help police and prosecutors, instead of a tool for meaningful reform of police practices,” said the NYCLU’s lead policy counsel, Michael Sisitzky, in a statement.