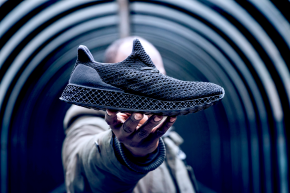 The fashion industry has been toying with the idea of 3-D for years now. There have been 3-D printed dresses on the runway, sneaker prototypes, and novelty pieces of clothing for sponsored athletes. However, Adidas is about to become the first to mass produce a product.

Adidas announced Friday that it’s going to make 100,000 sneakers with 3-D printed soles. The Futurecraft 4D’s color and pattern will be customizable online — just like current sneakers do — but customers will also be able to design the sole in order to fit their weight, gait and type of sport.

“This is a milestone not only for us as a company but also for the industry,” Gerd Manz, Adidas head of technology innovation, told Reuters. “We’ve cracked some of the boundaries.”

This is not the first time Adidas tries selling a sneaker with a 3-D printed sole. Last year, the company tried selling a couple hundred shoes that took 10 hours to print. Nike, Under Armor and New Balance have all experimented with the idea, but have to yet to mass produce.

Adidas will be working with a Silicon Valley startup called Carbon in order to mass produce the Futurecraft4D at a faster speed and cheaper price than a typical injection mold would. Currently, it takes Carbon one and a half hour to print a soul. Next year, the company is planning to speed up the process to 20 minutes per sole.

There will be 5,000 sneakers with 3-D printed soles sold in 2017, then Adidas will start selling the rest next year. The shoes will rollout in small batches in specific cities and for specific stores, but Adidas will eventually set up in-store measurements. It’s still unclear how much the Futurecraft4D will sell for, but Adidas is hoping to make it cheaper than last year’s show, which cost $333.