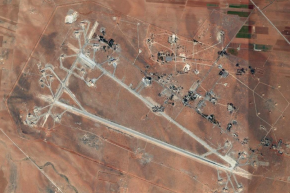 U.S. Launches Airstrike Against Syria In Response To Gas Attacks
By James King

U.S. Launches Airstrike Against Syria In Response To Gas Attacks

U.S. warships in the eastern Mediterranean reportedly launched 50 to 60 Tomahawk cruise missiles at military targets near the Syrian capitol of Damascus about 3:45 a.m. local time

The United States launched airstrikes against targets in Syria late Thursday in retaliation for gas attacks the regime of Syrian President Bashar al-Assad launched against his own people earlier this week. It was the first attack against the Assad regime by the United States in the country’s six-year civil war.

U.S. warships in the eastern Mediterranean fired 59 Tomahawk cruise missiles at a Syrian airbase near the capital of Damascus, at about 3:45 a.m. local time. Syria reports six people were killed in the blasts.

“There can be no dispute that Syria used banned chemical weapons … and ignored the urging of the UN Security Council,” President Donald Trump said at his Mar-a-Lago country club in Florida, where he is meeting with Chinese President Xi Jinping. “The refugee crisis continues to deepen and the region continues to destabilize.”

The airstrikes targeted the Al Shayrat airbase, the base where the chemical attack was launched, Trump said during the address following the airstrikes.

The strikes targeted airfields, runways, and other air force infrastructure. It’s unclear whether other strikes are planned in what appears to be a renewed effort by the U.S. to remove Assad from power.

Russian President Vladimir Putin reacted in fury to news of the strike, calling it an act of “aggression against a sovereign state in violation of the norms of international law under a far-fetched pretext.” He also said the strikes against the Assad regime, which Russia has supported since 2015, “dealt a serious blow to Russian-US relations.”

Trump has made a marked shift in his stance on the Syrian regime in the last few days in the aftermath of the chemical attacks. “Assad choked out the lives of helpless men, women and children,” Trump said during his address following the airstrikes. “It was a slow brutal death for so many. Even beautiful babies were murdered in this very barbaric attack.” As recently as early April, the president called Assad a necessary partner in fighting terrorism.

Trump previously stated that the U.S. has no business in Syria, where Assad has been engaged in a civil war with rebel forces since 2011.

“We should stay the hell out of Syria, the ‘rebels’ are just as bad as the current regime,” Trump tweeted in 2013. “WHAT WILL WE GET FOR OUR LIVES AND $ BILLIONS?ZERO.”

We should stay the hell out of Syria, the "rebels" are just as bad as the current regime. WHAT WILL WE GET FOR OUR LIVES AND $ BILLIONS?ZERO

The Obama administration launched years of airstrikes into Syria, but the target was always extremist groups, not Assad’s government.