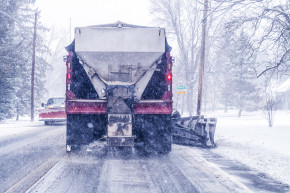 Hundreds of lakes in the northeast and midwest of North America are getting saltier, according to a study published Monday in the journal Proceedings of the National Academy of Sciences.

Starting in the 1940s, people started using salt to make roads less icy, and today the U.S. and Canada dump and estimated 23 million tons of it into roadways every year (the U.S. accounts for almost 80 percent of that). Previous studies have found that salt quickly dissolves into waterways, affecting rivers and groundwater, but researchers knew little about its effect on lakes.

So researchers from the Cary Institute of Ecosystem Studies looked at chloride levels for 371 lakes in the U.S. and Canada over the past few decades. Looking at the area surrounding each lake, they charted the changes in chloride levels against both changes in snowfall patterns and changes in the human footprint on the land, such as the amount of land covered by roads. They also compared the chloride levels of the lakes to areas that were covered by trees in order to ensure their results were specific to lakes.

Forty-four percent of the lakes had been getting saltier over the course of decades, they found. A few lakes in Maine hadn’t been getting saltier, likely because they also take in a lot of freshwater rain every year. The researchers suspect that a similar trend might be seen in more than 7,000 lakes in the U.S. and Canada, based on the characteristics of the lakes in the study.

“The picture is sobering. For lakes, small amounts of shoreline development translate into big salinization risks,” said Hilary Dugan, a limnologist at the University of Wisconsin-Madison and lead author of the study, in a press release.

These results are bad news for the ecosystems in these lakes. It could alter the position and function of important microorganisms like plankton, which could affect fish and other organisms that feed on them. “As a consequence of salinization, aquatic species richness and abundance may decline,” the study authors write.

If these current trends continue, the researchers note, many of these lakes will surpass the Environmental Protection Agency’s salinity levels for water that may be used for drinking. By 2050, 14 of them are predicted to surpass the EPA’s level of chloride that won’t endanger aquatic life.

The researchers recommend that local and state governments limit their use of road salt, especially within several hundred meters of freshwater lakes.