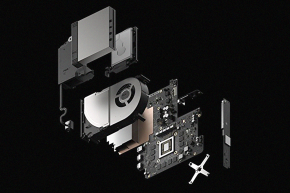 Gamers Are Pumped For Microsoft’s Coming Xbox One X

UPDATE: Microsoft finally revealed its latest gaming console Sunday at the E3 Expo in Los Angeles. The newest Xbox will not be marketed as Project Scorpio, but as the Xbox One X. The console will compete with Sony’s PlayStation 4 Pro and will go on sale November 7 for $499.

Microsoft has been teasing a new Xbox console codenamed Project Scorpio for nearly a year, and aside from just promising it’d be powerful, the company was really good at keeping all its specs under wraps. Today, gamers have been given proof the upcoming console will, indeed, be powerful.

Digital Foundry’s Eurogamer published an exclusive overview of Project Scorpio that reveals how the console will have faster loading, smoother performances and overall better graphics that the current “pro” console, Xbox One. In more technical terms, the console’s CPU (central processing unit) will 30 percent faster than the Xbox One’s and the GPU (graphics processing unit) will be nearly five times faster. Project Scorpio will also have faster streaming of high-quality art assets in 4K and Ultra HD resolutions. Other cool specs include a 1TB hard drive (which can hold thousands of games) and integrated power supply — as in, there’s no clunky external power brick.

XBX Scorpio is basically the PS4 Pro but done right. It's focused on the core gamer.

One feature that dedicated Xbox gamers will appreciate is backwards compatibility, which enhances the quality of current Xbox One titles and select Xbox 360 games. That means gamers can play all their favorite games on the same console and in HD.

Gamers who are fans of the Xbox brand already seem to be hyped with the few details they have. Mostly because of the RAM and the speeds at which it’ll operate. Gamers have also pointed out that Project Scorpio is bringing some serious competition to Sony’s PlayStation 4 Pro, which is aimed at the hardcore gamer and supports 4K gaming.

Wow @xboxuk have killed it with the scorpio specs. Wow. RIP PlayStation

Eurogamer said Project Scorpio will definitely be more powerful than the PlayStation 4 Pro, which means it’ll be more expensive. As for software, Eurogamer got to test a demo for the racing game ForzaTech and said it was very impressive. The game ran in full 4K quality and at 60 frames per second without any lag or graphic mishaps.

This is a screenshot on the new Forza game running at 4K on Project Scorpio. HOLY HELL. pic.twitter.com/JSl5phWQCg

Microsoft has yet to reveal what the actual console will look like, how much it’ll cost (probably more than $499) and its release date. It’s also missing a name, but that will certainly come later.