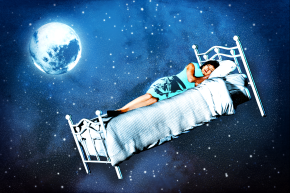 Volunteers Can Make $17,000 For Laying In Bed For Two Months
By Alasdair Wilkins

Volunteers Can Make $17,000 For Laying In Bed For Two Months

Two dozen young men are about to be paid about $17,000 each to do what sounds like the easiest job imaginable: lying in bed for two months.

But the gig, part of a scientific study to understand microgravity at the International Space Station, is way more brutal then it sounds. The volunteers can literally do nothing except stay in bed, having to remain lying down for every last second of those 60 days (yes, even when they need to use the bathroom).

Run by researchers at France’s Institute for Space Medicine and Physiology, the goal of the experiment is to figure out what supplements and treatments astronauts can take to counter the damage prolonged exposure to weightlessness can have on the human body. Zero gravity can negatively affect the body’s bone mass, immune system, metabolism, cardiovascular system, and sleep cycle, among other problems.

The 24 volunteers suffering for science must keep at least one shoulder in contact with the bed at all times, meaning they can’t so much as sit up for those two months, coordinating physician Dr. Arnaud Beck told a French news site.

Even saying they are lying flat is slightly overselling the situation: To properly replicate weightlessness, the beds are inclined downward so that the subjects’ heads are slightly below the rest of their bodies. As the 20 Minutes article points out, life aboard the International Space Station isn’t nearly as brutal and monotonous, but there’s no other way to simulate the effects of weightlessness over extended periods.

The upcoming experiment is the second phase of an ongoing study. The $17,000 pay carries with it a three-month commitment, as volunteers need two weeks before and after their bedrest to undergo tests and, at the end, physical therapy to recover. Would-be participants need to be men between the ages of 20 and 45 in good physical shape. It also probably helps to be okay with spending two months having a lot of free time and not a whole lot of dignity.