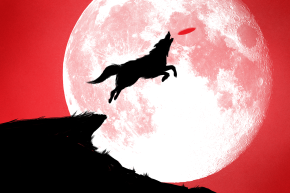 As habitats change, wolves increasingly rely on food from humans, just as dogs' ancestors did tens of thousands of years ago

Common advice to dog owners is to not feed their pet from the table, as otherwise it might develop too much of a taste for human scraps and stop eating dog food. Turns out that same basic principle can apply to an entire species.

A new paper finds that gray wolves all over the world are abandoning their natural diets in favor of human-made food. It might be enough to turn wolves into dogs all over again.

Wolf populations have returned to old habitats all over the world, with these efforts often being hailed as big success stories for environmentalism. The trouble, according to researchers writing in the journal Bioscience, is that the same humans who forced wolves out of their ecosystems in the first place also fundamentally changed those habitats, providing wolf populations with new food sources from livestock to garbage. When wolves’ natural prey like moose and deer are scarce, these human-produced food sources are far easier for wolves to get their paws on than more traditional alternatives like rodents, birds, and fish.

About a third of all food gray wolves eat now comes from humans. Iranian gray wolves, for instance, eat lots of farmed chickens and garbage, while Greek wolves eat a mix of domesticated pigs, goats, and sheep.

A change in diet that massive is going to affect a species. Indeed, it already did tens of thousands of years ago, as wild wolves’ increasing reliance on humans for food led to their gradual domestication into dogs. Ancient humans at some point did start actively breeding these creatures to select for the traits that would secure their position as humanity’s best friend. But the current archaeological evidence suggests that wolves had already adapted to become tamer and more easily able to digest human foods long before intentional breeding began.

That process may well be in its earliest stages with wolves and similar wild species like dingoes, whose diets have become essentially doglike along with some aspects of their behavior, movements, and social structure. There’s also evidence wolves are interbreeding with dogs, introducing traits to the gene pool that could push them closer to domestication.

Such a momentous change isn’t necessarily good or bad, but it will have huge knock-on effects beyond just wolves and dogs. If wolf populations do abandon their natural diets in favor of human food, their prey like moose and deer can explode in population, which in turn means overgrazing on trees and plant, further reshaping the ecosystem. And wolves aren’t the only predators who could be so affected: The authors note that climate change and rapid habitat change could force no less than the mighty polar bear to start relying on human food.