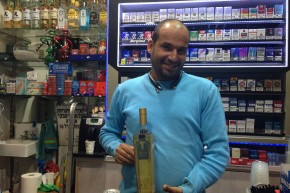 For One Week In Israel, Trump Vodka Lives On
By Shira Rubin

For One Week In Israel, Trump Vodka Lives On

The drink, once promoted as "success distilled," is one of the rare kosher-for-Passover vodkas available

There was Trump Airlines, Trump University, and Trump Steaks — all Trump-named businesses that ultimately flopped

But in Israel, one presidential brand — Trump Vodka — lives on among Jews who observe the week-long holiday of Passover.

“During Passover people go crazy for Trump vodka,” said David Nagar, an employee at the Mezizim bodega in central Tel Aviv, who said Trump vodka is one of the few kosher-for-Passover vodkas.

Nagar said that his father will be stocking up this year on Trump Vodka for the Passover seder table, and that it’s made him ecstatic. Nagar is a self-described Trump fan who says he believes that “Trump vodka sales will soar in Israel this year. We know that Trump is in the White House to fight for Israel,” he said.

During the holiday, grains known as chametz are forbidden for consumption, therefore ruling out most vodka brands and most other liquors. But Trump Vodka is made with potatoes.

The bottle resembles a gaudy Trump tower, golden on two sides, transparent on the other two sides. It has a T logo that was designed by Milton Glaser of the “I heart NY” logo fame. Launched in 2005, its tagline was “Success Distilled.”

Donald Trump himself emphasized the product’s flash rather than substance in an interview on the Don Imus show in 2005. (The US president is famously not himself a drinker.)

“I know it’s like tobacco companies making cigarettes and then advertising ‘Don’t smoke,’ ” he said. “But it’s a legal product, and if I don’t sell it, someone else will.” At the 2007 launch party in LA, he said, “It’s a smooth vodka, it’s a great-tasting vodka,” calling it “very high level, very high style.”

But it was only a matter of time before the company fell apart, plagued by flaws in all aspects of the production and dismal sales. The company to discontinued the product around 2011.

Like many of the other products in the Trump Organization portfolio, Trump did not technically own Trump vodka, but only licensed his name out — though that yielded Trump at least $2 million in royalties by November, 2008.

Around that same time, Trump Vodka made a deal to sell the vodka in Israel through the company H. Pixel International, which had previously imported the product. Trump would later sue that company for copyright infringement, before dropping the suit.

During this year’s election campaign, Trump was often hammered for the failure of various businesses. Mitt Romney said of then-candidate Trump, “What ever happened to Trump Airlines? How about Trump University? And then there’s Trump Magazine and Trump Vodka and Trump Steaks, and Trump Mortgage? A business genius he is not.”

But, Trump Vodka lives on, at least this week. It’s still being produced in small quantities in Germany, Evyatar Sadan, an employee at the Lord of the Drinks liquor supplier in Ramat Gan confirmed.

However, its Passover selling point may not even be legit: In March, 2015, and again in December, 2016, the chief rabbinate of Israel warned that some bottles were not in fact kosher, and ordered the rogue batches, allegedly from 2013, off the shelves.

Trump vodka for sale in an Israeli liquor store.

Nagar, like many other Israelis asked about the vodka, said that he wouldn’t “drink this Trump Vodka any other time of the year, it doesn’t really hold up.”

Still, Nagar’s proud to be drinking Trump Vodka this year. “Unlike Obama, Trump is tough,” he says. President Trump’s recent airstrikes against Syria are boosting his popularity in Israel, where they’ve received across-the-aisle praise.

“President Trump sent a strong and clear message today that the use of and spread of chemical weapons will not be tolerated,’’ said Israeli Prime Minister Netanyahu in a statement on Friday.

Even left-wing politicians and security experts like Tsipi Livni, a parliament member from the Zionist Union part, praised the strikes as “important, necessary and correct.”