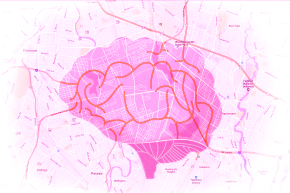 Google Maps Is Making Our Brains Dumb
By Alejandro Alba

Navigation apps like Google Maps and Waze might seem like they’re making it easier to get from one place to another, but based on new research, there’s a huge tradeoff: these apps may actually be making our brain lazy and dumb.

Neuroscientists and cognitive scientists from University College London recently published a study that shows how mental power from people who navigate from memory is much higher than those who follow turn-by-turn directions.

The scientists concluded this by tracking the brain activity of two dozen participants as they tried to virtually navigate the London neighborhood of Soho. In the first test, participants had to figure out their destination themselves, but in the second test they were prompted with app directions. The result was that those using their memory to get to a destination had higher brain activity than those depending on an app.

“That might well not be good for you,” Hugo Spiers, the study’s major author, told Popular Science. “It might be better to actually give your brain a bit more of a workout.”

People who were relying on memory to navigate were showing more activity in their hippocampus, which is the part of the brain associated with emotion, memory, and the autonomic nervous system. Spier said that activity would increase with the street’s complexity. However, brain activity would not increase with the GPS scenario — no matter how many intersections or turns the street had.

Spier believes parts of the hippocampus could atrophy if people continue to depend on GPS apps and don’t work out their brain. Neurological researchers in the past have also supported this theory. Some have also said that atrophy of the hippocampus can be tied to an increased risk of dementia and Alzheimer’s disease.

Previous studies have also shown that memorizing the blueprint of the city and navigating from memory increases activity in the hippocampus. In 2011, a group or researchers published a study that reveled how London taxi drivers experienced gains of gray matter (a collection of cells, which if higher in density, correlates to improved ability and skill) in the hippocampus and positive changed in the memory profile.