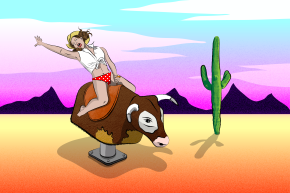 30 Years Of Orgasms: Why The Sybian Remains The Cadillac Of Sex Toys
By Allee Manning

30 Years Of Orgasms: Why The Sybian Remains The Cadillac Of Sex Toys

Inspired by the complaints of infrequent orgasms he heard from women in the instructional dance classes he taught, Lampert launched the Sybian through a titillating cover story in Penthouse Forum magazine in December 1987. Quickly, the massive gadget would come to upend the small but growing sex toy industry.

“Plug into the ultimate joy ride,” the Penthouse Forum article enticed, featuring the first-person account of Jessica West, a writer who first saw the Sybian on display at a swinger’s convention and chronicled her experience trying it out before it went on sale.

“We launched quietly, without much advertising and not knowing exactly how the Sybian would be embraced,” Lampert, now in his eighties and recently retired, told Vocativ in an e-mail through his daughter, Bunny, who helps run the family business at its farmhouse office in rural Illinois. What would later follow could only be described as Sybian madness.

Within months, the thousand dollar-plus machinery would gain an outsized reputation in the adult entertainment community — and later, in a more mainstream world after live Sybian demos became a regular feature on the Howard Stern Show. Lampert himself even appeared on the radio show once, coaxing a pornographic actress through what she estimated to be about 15 or 20 orgasms in less than five minutes. The Sybian received its first and only New York Times mention in an article about the radio personality.

The result: a hand-built machine able to support 1,000 pounds of pressure and equipped with two separate motors capable of producing vibrations at a speed of 6,500 rotations per minute, which is faster than computer hard drives and several times that of a typical washing machine drum.

Creator Dave Lampert in the warehouse, with a "colorful bouquet" of Sybians.

According to Bunny Lampert, the Sybian has been shipped to 80 countries around the world, and sales have only increased year-over-year since 1987, excepting mild downswings timed to the 2008 financial crisis (she declined Vocativ’s request for exact sales figures). Employees who make the Sybian in Monticello, Illinois, work every day that UPS ships.

The biggest change in 30 years, Bunny Lampert said, is society’s increasingly open and sex positive attitude, which has influenced how the company talks about its product — at least, in some settings. Nestled away off a single-lane road in the outskirts of a small, conservative city, the Sybian’s farmhouse office and warehouse doesn’t try to draw attention to itself or its mission in the local area.

“We don’t really talk about it in this area,” Bunny said. “We don’t advertise that we’re here. We just do our thing and exist quietly, unless asked about it.”

It's Ladies FREE at @EXXXOTICA tonight in #NJ and the #Sybian booth is packed! #exxxotica #exxxoticanj pic.twitter.com/A0gou0yna3

“Ruby the Original” first tried the Sybian on-set for Seymour Butts’ 1998 film “Orgasmatic,” receiving an Adult Video Network nomination in the category of “most outrageous sex scene.” Though Ruby has been retired from the adult industry for 13 years, she has certainly not retired from the Sybian. Gifted one by a close friend, she now keeps it in her closet most of the time — she lives with her children, after all.

“I joke frequently that I will be the only little old lady on the block with a smile on her face,” she said.

Ruby calls the Sybian more of a “special occasion toy” due to both its powerful nature and the logistics of using something so loud. Many users report placing a towel under the Sybian to muffle the sound, but its powerful engines are hard to contain, with thick, rumbly vibrations that can be felt through walls when at its highest setting.

“The Sybian is like an investment in your sexual and healthy lifestyle,” Bunny Lampert said of the product’s cost. “Things that are important to you, you figure out a way.”

The Sybian — named for an ancient Greek city associated with luxurious living — costs over $1,300 not including its many special attachments.

While a cheaper competitor with a similar design called the MotorBunny emerged in 2015, reviewers say it’s louder and less powerful. Other competitors, like the poorly-reviewed DIY Sybian, have come and gone over the years. “We will remain the one to rise to the top,” Bunny Lampert asserted, noting that Sybian features medical-grade silicone and motor longevity that knock-off models do not.

Though the company does not recommend sharing or renting Sybians due to health and hygiene concerns, there are services that do this — at a cost. Several companies that advertise rentals did not respond to Vocativ’s interview requests (likely because Sybian explicitly prohibits resale in its customer contract). Other low-commitment options that have become popular are Sybian’s used in “play parties” and other sexual social settings.

Ashley Manta, a sexuality educator, keeps a Sybian in the trunk of her car about half the time, “just in case” the opportunity to show it off arises. It happens once in awhile:  Manta is a fairly regular attendee and host of parties, where she said her Sybian (outfitted with Saran wrap, condoms, and wiped down between users) is a true crowdpleaser.

“The Sybian allows you to really experience pleasure in sort of new and novel ways, which can help facilitate orgasms,” she said. “It is a way for the people who are using it — regardless of bodies and genital configurations — to experience new sensations with your body and have control over your experience with the modulated dials. It puts you in the drivers’ seat.”

“Since the industry has gotten as large as it is now, the intimacy level between the performers has dropped, so you really don’t see real orgasms, not like you used to,” she said. “[People] want to see real orgasms. When you find your favorite performer’s Sybian scene you can pretty much guarantee that’s their orgasm.”

“I’ve noticed that the Sybian’s really popular with camgirls, who can interact with the people watching them,” she said. “As some of the camgirls rise to the top and get a huge following, they can spend the time and have those real orgasms. It’s a different kind of connection.”

The technological aspect of it that drew people in back in the 1980s — Penthouse Forum’s original cover read “artificial intercourse is here” — may still play a role in its appeal as well.

“I think it’s sort of like the Matrix-y human-plus-machine thing that makes it so hot,” Manta said. “This is an entirely inanimate object that is being used to create and enhance pleasure. So watching someone either take control of their own pleasure or watching someone give up that control to the person who is controlling that device….there’s a power dynamic there that is very sexy.”

Of course, the Sybian isn’t always ideal for everyone or for everyday use, something that people shelling out might want out of an investment.

“Having a huge, powerful saddle positioned in the middle of the room makes a very big statement about what is going on tonight,” said Timaree Schmit, a sexologist who runs the NSFW informational website Sex With Timaree.

“You have to straddle it, which can quickly become uncomfortable for your knees, and meanwhile there’s nowhere to put your hands,” she told Vocativ in an e-mail. (This is part of the reason David Lampert has long recommended using the device with a partner’s aid.)

Several of the 12 people who have tried out her Sybian and signed her corresponding guestbook agree. One entry reads, “I came, but I did not have fun.”

As they say, different strokes for different folks.