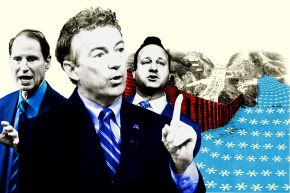 Congress Weighs Halting Gov From Unlocking US Phones At Border

The Supreme Court already ruled in favor of privacy. But Customs and Border Patrol hasn't listened

A bipartisan bill from some of the biggest privacy defenders in Congress would prevent the Trump administration from demanding Americans’ phone for inspection after traveling abroad.

The bill, the Protecting Data at the Border Act, would prevent Customs and Border Patrol from forcing American travelers to give access — meaning a fingerprint, password, passcode, pin, fingerprint, or biometric login — to their phone as part of a routine border search. Its sponsors include Senators Ron Wyden (D-Oreg.) and Rand Paul (R-Ky.), as well as Representative Jared Polis (D-Colo.).

Such a rule has already been established by the Supreme Court, which ruled in United States v. Cotterman that a man shouldn’t have had to surrender his laptop as he returned from Mexico in 2007. But that’s not been CBP’s policy, at least consistently, since Donald Trump assumed the presidency. Numerous travelers have reported being forced to hand over their phones and login information. That’s particularly true for people those traveling from the seven Muslim-majority countries named in Trump’s executive orders to restrict travel, which are currently held up in judicial limbo due to constitutional concerns.

Privacy advocates have praised the initiative. “The Supreme Court has made clear that generally law enforcement must get a warrant before searching an electronic device.  Yet, Customs and Border Protection continues to seize and search thousands of travelers’ devices every year without a warrant,” Neema Singh Guliani, ACLU policy counsel, said in a statement provided to Vocativ.

“Congress must now take action to end this unwise and unconstitutional practice by enacting this important bill.”

“A search of your cell phone or social media account is a direct look behind the curtain that covers the most intimate aspects of your life,” said Greg Nojeim, a Director at the Center for Democracy and Technology. “This bill would ensure that the government demonstrates a good reason for searches at the border.”

While the bill would protect Americans and green card holders, it has its limits. The Wall Street Journal, citing White House officials, reported Tuesday that the Trump administration is considering taking its idea of “extreme vetting” so far as to demand all foreigners who enter the U.S. hand over their phones’ contacts list and passwords to their social media account.

Such a policy would be extremely controversial and likely to spur other countries to retaliate with similar policies toward Americans, but it wouldn’t be addressed by Wyden and Paul’s bill, as that only applies to U.S. persons.