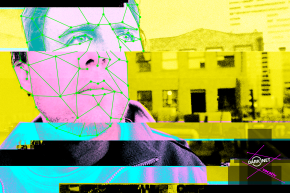 A False Facial Recognition Match Cost This Man Everything

One night in September 2014, Steve Talley answered a knock at his door from a man who claimed to have accidentally hit his car. He had no reason to expect that the next few moments would change the course of his life.

Dressed only in boxer shorts and a t-shirt, Talley went out and crouched in the driveway to inspect his car — but there was no damage. Suddenly, Talley said, he was ambushed. Three men dressed in what Talley describes as SWAT gear tackled, kicked and punched the then-44-year-old Denver man. After the brutal beating, one explained that Talley was under arrest for two recent armed bank robberies, one of which involved a physical assault on a police officer.

“I remember telling them they were crazy, and they had got the wrong guy,” said Talley, a father of two and financial analyst who had recently lost his job.

Talley wasn’t lying, though it would take two months for his public defender to prove it. His arrest had followed anonymous tips from people who had seen surveillance footage on the news and mistakenly thought it was Talley. His ex-wife, fighting Talley for custody of their children at the time, also identified him as the suspect. Charges were finally dropped after Talley’s lawyer unearthed an audio recording of him at work at a financial firm at the time of the first robbery.

Now dealing with a host of medical, personal and financial problems stemming from his arrest, Talley didn’t know how things could get worse. Then he was arrested again in December 2015, charged with committing the second bank robbery. This time, Denver police, with the assistance of an FBI examiner using facial comparison technology, claimed to match Talley with the sunglasses and hat-clad suspect. The software and approach that was used, it has been shown, only garners a subjective estimate as to whether two images show the same person. It’s meant to serve as an investigative tool not evidence.

Talley had an alibi for the day of the robbery — he had signed in to a soup kitchen across town. And yet, the case went to trial. But there was even stronger evidence pointing to his innocence. A bank teller told the jury she was absolutely certain Talley was not the robber. Further analysis of a mole on his cheek not visible in the CCTV footage and the fact that his height and weight did not match that of the suspect helped to finally convince the prosecution to drop charges. But the damage was already done.

Now homeless, unemployed, facing health complications, and estranged from his children, Talley still struggles with what happened to him. He’s filed a $10 million federal lawsuit against the city of Denver and its police department that he hopes will finally clear his name. The lawsuit alleges that officers involved violated identification procedures and protocols in interviewing the bank teller of the second robbery. The Denver City Attorney’s Office did not respond to a request for comment on the ongoing case.

Talley’s nightmare story is featured in Vocativ’s Showtime series “Dark Net.” We recently checked in to see how his life is going now, about a year after the case against him was dropped.

Vocativ: What have you been up to?

Steve Talley: I wish I could tell you my life’s been turned around, and I was able to rebuild my life and I met my kids again and reconnected, but it’s still been the same. In terms of my career, it’s been destroyed. I’ve lost my licenses now because I wasn’t able to get gainfully employed in the financial industry during the two-year period [in which he was being investigated]. All that’s gone.

I’ve been getting a lot of challenges just trying to get employed because they do background checks before they even try to qualify people. No one’s going to hire me. If you Google my name, I won’t seem like the most trustworthy person. I’m being viewed as a felon, and a felon can only get jobs in construction, it seems like. And that’s very hard for me to do due to my back injuries, my leg, and my blood clots. So I just kind of volunteer [at a local homeless shelter]. It gives me some stability and some joy in helping some of the poor people like me.

Vocativ: You’ve said your injuries were sustained in September 2014 when you were first arrested. What happened that night?

Talley: As I started crouching down to look at my car, there were at least two flashbang grenades that went off in my face, like 11 or 12 bangs. I could kind of see through the haze and it looked like an army running towards me, all armored up. They didn’t identify themselves, and within two seconds, even though I was attempting to comply, they basically just tackled me. One man stood on my face and cranked my arms that were already restrained. I thought he was going to rip my arms out. One man probably said “Don’t fuck with our boys in blue,” or something like that. One was on the side kicking me in the ribcage area. I was getting blows to my back, my butt, my groin area, and my legs. It felt like forever, but it was probably about two minutes.

When I was getting beaten I remember thinking about my kids. At one point I think I was actually screaming for the police cause I could see sirens. Then I finally realized these were cops who were beating me up.

What concerns me is, I don’t know how close I was to being killed. If I ran, they would have shot and they would have been legally justified to shoot me. Here I am, an innocent person, and they could have shot and killed me because I didn’t know what the hell was going on. And my legacy to my kids would have been, “My daddy was a bank robber, and he was killed by the police.” No one would have researched it or decided to investigate further, finding out that I was at work. It’s insane that the police have this power. I was restrained at the time the beating occurred and it continued to occur. Four broken ribs, blood clots, sciatica, ruptured disc, a fractured penis. They knocked my teeth out, I have PTSD, [and] I have hearing impairment. I don’t even like to think about it. It gets me very angry.

Vocativ: How do you deal with the grief this has caused you?

Talley: That’s a tough one, I’ll be honest with you. My tinnitus I hear mostly when I first wake up in the morning, and in the evening, when it gets quiet. I go to bed constantly reminding myself of what happened. I do see a psychiatrist once a month. First, they loaded me up with tons of medicine. I was on Xanax and Ambien and Zoloft, all kinds of stuff. I finally got myself off all those because I didn’t want to be on those long-term. I think a big part of staying positive has to do with the devastation between me and my family. My family just consists of me and my two kids, and I haven’t been able to see them since this incident occurred. My name’s probably been slung through the mud. Even though I have court paperwork saying I have joint custody, I’m not pushing that because I’m not even in a position to have joint custody right now. That’s what I look forward to, being reconnected with my kids. I’m constantly thinking about them and hoping that I’ll be able to be a dad again. I take it day by day.

Steve Talley at the homeless shelter

Vocativ: Prior to your arrests, were you aware that facial recognition and facial comparison was being used by local and state police agencies?

Talley: I knew that a lot of agencies like the CIA or NSA were utilizing eye recognition and some other technologies to identify terrorists, but I didn’t know how big it was until all the Snowden stuff came out. Then I realized they’re doing a lot more, like looking at emails, looking at social websites, capturing profiles that aren’t even in the jail system, and throwing images in those databases. But once this happened to me and I started researching it, I learned a lot more about how it’s being used, how they’re proposing to use it. Obviously there are concerns and issues. I’m the perfect case in point. Take an individual who has a normal life and now it’s destroyed. All because they relied upon facial recognition so much. Maybe someday it will be extremely accurate but at this point in time, it needs more oversight. It needs to be more accurate before they haphazardly use it to screen people.

Vocativ: What else can prevent what happened to you from happening to anyone else?

Talley: It seems like there’s this huge awareness coming on about police brutality and accountability and transparency of police departments. Obviously with the advent of smartphones, there are a lot more instances that are recorded now, which I think is great. If police are doing the right thing, that’s going to exonerate any individuals that claim police aren’t doing what they’re supposed to. I also think those SWAT guys should wear body cams.

Vocativ: What’s going on with your lawsuit?

Talley: I don’t know how civil lawsuits are supposed to go, but it seems like it’s just painfully slow. My attorney [who helped exonerate the Central Park Five] seems very positive about how strong the case is, but the defendants have been going through all these motions with the court to try to get it dismissed. My assumption is that once they exhaust their ability to attempt to dismiss it and the judge tells him we have a valid case to proceed to a jury trial that there will be a pickup in dialogue between my attorney and their attorney. But if not, I’ll go to trial.

I wouldn’t want to settle, because there’s so much police brutality here and they obviously don’t care because they keep settling cases. So maybe I’m the one guy who should go to trial and take it all the way, do what I have to do. Otherwise, it’s going to just continue to happen.