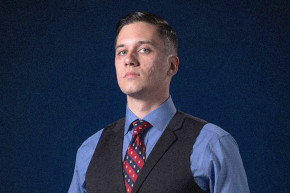 A prominent, controversial Libertarian provocateur often associated with white nationalists and the “alt-right,” and who staged an unsuccessful campaign for a U.S. Senate seat in 2016, has been accused of beating and sexually assaulting a woman who claims to be his former girlfriend.

Augustus Sol Invictus, an attorney who ran as a Libertarian in 2016 for the Senate seat currently held by Senator Marco Rubio, has been accused by a former girlfriend of assaulting and sexually abusing her on multiple occasions over several months, according to an incident report filed in March.

Invictus has a lengthy history as a provocative, far-right-wing nationalist who penned a lengthy paper about the benefits of eugenics, and once said he sacrificed a live goat to “the God of wilderness.” He currently runs a far-right, anti-Muslim, anti-immigrant website called The Revolutionary Conservative and serves on the Libertarian Party of Florida’s legislative committee. According to the incident report, he also allegedly beat his now-former girlfriend and held her captive for several days in the home she says they shared — “until her bruises healed.”

Invictus did not respond to requests for an interview, but the Edgewood Police Department in Florida confirmed that the report against Invictus was filed on March 21. A spokeswoman for Invictus, Raquel Okyay, said there is no truth to the allegations whatsoever, saying that the alleged victim “is a drug addict and a prostitute.”

“We have that evidence but we’re not releasing it,” she insisted when asked for proof.

In the report, Invictus’ former girlfriend describes 15 months of abuse that included “smashing her head into the center console of a vehicle, pushing her out of a moving vehicle, punching her, kicking her, choking her until she would pass out, throwing her across a room and dragging her.”

The woman, who says she has since moved out of the home the two shared, according to the report, described Invictus as a “high-powered attorney” with ties to white supremacists. She told investigators that despite no longer living with Invictus she doesn’t feel safe. Asked why she never previously reported the alleged abuse, she said Invictus threatened that if she “ever said anything to anyone he would hurt her family and friends.”

Despite the report, Invictus could not be charged because the alleged crimes did not occur in the jurisdiction in which his former girlfriend reported them. The investigator who took her statement advised that she get an immediate injunction against Invictus and file a report with the Altamonte Police Department, which would have jurisdiction over the case. It’s unclear whether she ever did — a spokesperson for the APD said she found no incident report filed against Invictus when asked Tuesday.

Invictus’ candidacy for Senate was marred in controversy and divided the state’s Libertarian Party. Adrian Wylie, the then-chairman of the state’s Libertarian Party and former gubernatorial candidate, resigned his post in opposition to the candidacy of Invictus, whose supporters, he said, are “known members of Neo-Nazi and white supremacist groups, such as American Front, Vinlanders and Stormfront, and he has been recruiting them into the Libertarian Party.” Wylie also accused Invictus of “brutally and sadistically dismembering a goat in a ritualistic sacrifice,” a claim Invictus did not deny.

“I did sacrifice a goat. I know that’s probably a quibble in the mind of most Americans,” he told the Orlando Sentinel. “I sacrificed an animal to the god of the wilderness … Yes, I drank the goat’s blood.”

An August 2015 blog post reportedly written by Invictus titled “A Call for Total Insurrection” also emerged during the campaign, in which Invictus wrote, “I want you to take LSD and practice sorcery. I want you to listen to trap music and black metal, to learn the law and to break it deliberately, to find your own religion. I want you to learn the use of firearms and subject yourselves to rigorous physical training. I want you to treat your bodies as Holy Temples and to take your girlfriend to a strip club so you can seduce a dancer in the back room. I want you to worship Nature and dance naked in the moonlight `round the fire, screaming in ecstatic joy.”

Invictus ultimately lost the Libertarian primary but emerged as a prominent voice in far-right politics. Okyay, his spokeswoman, said Invictus is taking legal action against his accuser.