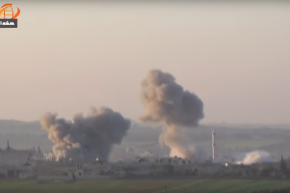 Video of the airstrike in Idlib province — YOUTUBE
By Shira Rubin with Jacob Steinblatt
Apr 04, 2017 at 5:32 AM ET

Airstrikes on a rebel-held area of the northern Idlib province conducted either by the Syrian or Russian regime jets have killed at least 58 people, including nine children, according to the British-based Syrian Observatory for Human Rights. Bombs have also hit a hospital treating Syrian victims suffering injuries as a result of the gas attack, AFP reported.

RFS media, a rebel media group, posted on Facebook that the death toll had reached 70, and was expected to grow.

Syrian opposition activists and doctors working in the region posted photos and video to Twitter of dozens of dead or wounded people, including children, whom it said had been exposed to chemical weapons released with the airstrikes. Photos showed people with foam around their mouths, and rescue workers hosing down children squirming on the ground.

A man breathes through an oxygen mask as another one receives treatments, after what rescue workers described as a suspected gas attack in the town of Khan Sheikhoun in rebel-held Idlib, Syria.

“Do u still doubt that #Sarin is being used on us? Non-reactive pinpoint pupils! We have samples. Will anyone care!? Who will stop it? #Syria,” tweeted Shajul Islam, a doctor working in northern Syria. He posted video from a chaotic hospital room treating victims from Khan Sheikhoun, one of the targeted towns. Islam claimed civilians had been exposed to sarin, a chemical that causes the nerve system to collapse.

OUR HOSPITAL GETTING FULL FROM THE SARIN ATTACK TODAY. ANYONE THAT WANTS EVIDENCE, I WILL VIDEO CALL YOU.

The Syrian government has repeatedly denied using chemical weapons, but an investigation by Human Rights Watch in February found that Syrian military helicopters systematically dumped chlorine gas, a banned weapon, on residential areas of Aleppo at least eight times late last year as they battled to reclaim the city from rebel groups.

An investigation last October by the United Nations and the Organization for the Prohibition of Chemical Weapons found that the Syrian government has used chemical weapons at least three times in 2014 and 2015. It also found that ISIS militants had used the blister agent sulphur mustard.

U.S. Ambassador to the UN Nikki Haley said on Monday that Syrian President Bashar al-Assad was a “war criminal” who carried out “disgusting” acts against the Syrian people, but reiterated the Trump administration’s declaration on Friday that the U.S. is focusing on defeating ISIS.

“Right now Assad is not our number one person to talk to,” she said.

Caption: A video of the attack, allegedly carried out by Syrian regime forces, in Khan Sheikhoun, Syria, uploaded by a rebel group.