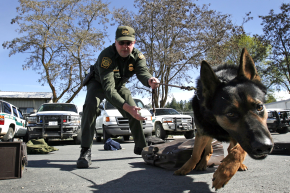 Now that President Donald Trump plans to hire 5,000 border patrol agents and amp up border security, it’s a good thing United States Customs and Border Protection (CBP) is making an effort to study the health of agents who are probably the least likely to complain about overworking — canines.

Every day, hundreds of dogs — from San Diego to Brownsville, Texas, across the U.S.-Canadian border, at international airports across the country, and at stations abroad — work tirelessly to detect narcotics, immigrants, weapons, and explosives. But it’s not easy to tell when these pups are working too hard.

The study of the psychological and physical toll that combat and high-stress work takes on dogs is relatively new. The concept of canine post-traumatic stress disorder originated in 2009, according to a New York Times article on military veterinary science. Walter F. Burghardt Jr., chief of behavioral medicine at the Daniel E. Holland Military Working Dog Hospital at Lackland Air Force Base, told the Times that about five percent of combat dogs suffered from PTSD.

Canines that work for CBP do not witness as many explosions and violent acts as combat dogs, but they experience harsh environments and stressful conditions, and work with handlers who, even if they’re properly trained, may not be able to understand when a dog is overexerting itself. When the Department of Homeland Security (DHS) originally solicited for “K9 Wearable Technology” proposals last summer it explained the need to better understand the vital signs of dogs: “Due to the high-pressure operations tempo, physical demands, and varied climates in which canine teams must operate, canines may suffer health problems that — if not identified and remediated quickly — may cause severe illness, injury or even death.”

In a Nextgov interview, Damian Montes, director of CBP’s Canine Program, elaborated on why dogs in his field are particularly vulnerable.

“A lot of what we do, and where we operate, is in austere environments: the Northern border, where it’s extremely cold, or the Southern border, where it’s extremely hot and dry,” Montes said. “There are so many variables in our environment — the weather we have, the breed. Some dogs have shorter hair, some dogs have longer hair.”

Last week, the DHS announced it is awarding the company PetPace $198,000 to develop health-monitoring devices for border-patrol canines. The award comes through the department’s Silicon Valley Innovation Program, which targets small tech companies instead of major defense contractors that federal agencies typically work with. PetPace is an animal-centric health tech company that produces smart collars that monitor pets’ respiration, heart rate, temperature, and posture, and sends alerts to pet owners’ phones. Now the company will modify their technology for use on U.S. borders.

“CBP has one of the largest and most diverse canine programs in the country with more than 1,500 canine teams trained in disciplines such as search and rescue and firearms and currency detection,” said CBP Acting Commissioner Kevin McAleenan, in a statement. “This program provides an opportunity to gather new data in the training environment, which could translate to improved animal performance and care in the field.”

The DHS plans on analyzing all the collected data to learn how to improve conditions and practices for canine units, but it will also help agents better understand their four-legged partners. According to Montes, CBP agents are trained to identify health issues. They check hydration by lifting the dog’s scruff and seeing how quickly it lays down, check blood pressure by pressing on dogs’ gums to see how quickly the blood returns, and check temperature with a rectal thermometer. But it’s difficult to tell if a dog is being overworked or overexposed to the elements, “because the dog is going to want to work; that’s its natural drive,” Montes told Nextgov.

PetPlace is just the first company to receive an award under the “K9 Wearable Technology” solicitation, which is open until June. The CBP still plans on granting money to other companies that want to develop ways to track and analyze some of the hardest-working border patrol agents.