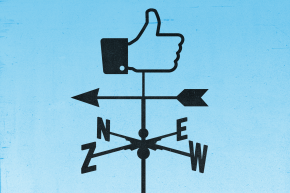 The initiative, by Facebook and other tech giants, will address "fake news," reporting inaccuracies, and new ways the internet can spread information to the public.

Facebook and other companies are partnering up to help fund a 14-million-dollar initiative to help restore trust in the media — at a time when it really needs it.

The News Integrity Initiative will be based at the CUNY Graduate School of Journalism in New York City and partner with a number of institutions around the world to help educate people about media literacy.

“As part of the Facebook Journalism Project, we want to give people the tools necessary to be discerning about the information they see online,” Campbell Brown, Facebook’s Head of News Partnerships, said in a statement. The company launched its own media literacy project in January. Faculty and students of the CUNY Journalism program will collaborate with researchers and technologists, and conduct research in support of the initiative’s goal.

The non-profit initiative comes at a time when public trust in the media is at an all-time low. According to a recent poll, only six percent of Americans said they have “a lot of confidence” in the media, and nearly 40 percent said they can point to a specific incident that caused this mistrust, often the result of inaccurate reporting or bias. President Donald Trump’s consistent accusations that critical news reports about him are “fake news” and “a total scam“, as well as claiming the media is the “enemy of the people,” has likely only helped deepen this mistrust.

The 2016 election cycle saw an unprecedented flood of actually fake news. The New York Times profiled a young American who made up a story about ballot box stuffing for Hillary Clinton, and watched it ricochet around Facebook and into the feeds of millions of readers. This phenomenon — just one of many examples from last fall — was fueled by the new ubiquity of sites like Facebook as a source for news.

The fake news echo chamber is compounded by people’s low levels of media literacy. A recent study showed that students have a hard time identifying real news, with more than 80 percent of middle schoolers unable to tell the different between sponsored content and news reports. “In high school U.S. history, I learned that a trustworthy press is the immune system of democracy,” said Craig Newmark, a funder of the initiative and founder of craigslist and the Craig Newmark Philanthropic Fund.

After the election, in a widely shared post, Facebook founder Mark Zuckerberg denied his platform had played any meaningful role in disseminating fake news, writing that “99% of what people see [on Facebook] is authentic.”