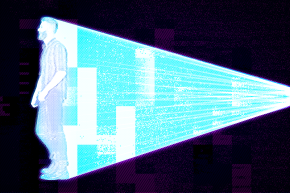 Hologram Calls Could Be The Future FaceTime
By Alejandro Alba

Hologram Calls Could Be The Future FaceTime

The concept of hologram virtual conversations is something we’ve seen in sci-fi movies for decades now but has never come to fruition. That could soon change: Verizon and Korean Telecom teamed up this week to make what the companies say is the world’s first live hologram call over a 5G network.

The phrase “hologram call” might immediately bring to mind an image such as R2-D2 displaying a hologram of Princess Leia in Star Wars, but the demonstration was actually much more basic than that. The call between Verizon and KT featured two employees who appeared on each other’s screens as hologram images. Verizon’s employee was in New Jersey and KT’s was in Seoul.

Although a blue hologram displaying on top of a table would’ve been cool, smartphones don’t have that technology just yet. So instead we get holograms that still require a screen to watch and appear as 3-D hologram pictures. Eventually, when 5G is commercialized and augmented reality projection technology is developed for phones, “users will be able to meet a person in a remote area in a real size in real time,” according to a KT spokesperson.

Making an international hologram call requires high data rates and low transfer delays on a worldwide scale, therefore it could only be successfully completed on 5G network speeds. Smartphones running on a 5G network are capable of streaming and downloading data at faster rates. The demonstration was mostly an indicator of how fast smartphones could operate once they support 5G networks over the next few years.

It’s unclear if Verizon is also thinking of offering these services to U.S. customers, but it was mostly testing it out to demonstrate the capabilities of 5G technologies. However, it’s not hard to imagine holograms being on a future iteration of a smartphone, as manufacturers and carriers look to continually update what many feel has become a mature technology. Companies like Apple are reportedly working on augmented reality technology, which could lead to turning FaceTime into a holographic experience.